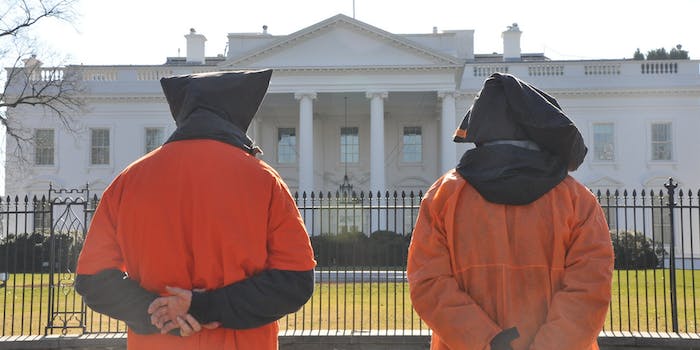 The case against torture

It's time to #CloseGitmo.

If there was any doubt that Jeb Bush would repeat his brother’s mistakes on the use of torture if elected president, it has been decisively dispelled.

Last December, the Senate published a report that harshly criticized the use of torture by George W. Bush’s administration. Although it noted that the president himself wasn’t informed of the details of these “enhanced interrogation” techniques until 2006, Bush nevertheless offered a characteristic defense of the people who worked for him, declaring on CNN that “if it diminishes [the CIA’s] contributions to our country, it is way off base.”

Now pay attention to the similarity between George W. Bush’s language and the rhetoric employed by Jeb earlier this month. When asked whether the United States should close its controversial base on Guantanamo Bay, Jeb Bush replied that “closing it down for political purposes is not the right thing to do. Unless there is some compelling alternative, I believe we should stay the course.” Just like the last Bush to serve in the White House, Jeb’s priority isn’t discussing the morality or usefulness of torture itself but is deflecting those questions by preemptively challenging the motives of those who might oppose it.

Jeb Bush said closing Guantanamo Bay is "not the right thing to do." He added that closing about half the Starbucks, however, was.

And with that @JebBush has lost what little credibility he had as a legitimate Presidential Candidate. #CloseGitmohttp://t.co/FvpOVGtPQM

This would be bad enough if it was done to protect a policy that had some merit. It is absolutely unforgivable when used to preserve something as irredeemable as torture.

“The CIA’s torture program was even more ruthless than we were led to believe,” explained veteran DEA interrogator Donald Canestraro after the Senate’s report was released. “Waterboarding, beatings violent enough to break bones, assault, mock executions, electric shocks to sensitive areas. … It didn’t prevent any attacks and or gain information that couldn’t have been gained legally through rapport-based interrogations.” That point bears repeating: Torture doesn’t work. Indeed, not only was torture in no way responsible for discovering Osama bin Laden’s location, as many wrongly believe, but it has never been proven to have led to the apprehension of a terrorist.

Why is the practice so ineffective? Reed College professor Darius Rejali put it best in an interview with Medical Daily: “The problem of torture does not stem from the prisoner who has information; it stems from the prisoner who doesn’t.” While a prisoner who has legitimate information may cough it up while being tortured, “the torture of the informed may generate no more lies than normal interrogation.” By contrast, Rejali explains that “the torture of the ignorant and innocent overwhelms investigators with misleading information.”

Recent research has only served to reinforce this point. Referring to the notion that torture can break a bad guy into telling the truth as “folk psychology,” neurobiologist Shane O’Mara of the Trinity College Institute for Neuroscience was quoted in Newsweek as saying, “Solid scientific evidence on how repeated and extreme stress and pain affect memory and executive functions (such as planning or forming intentions) suggests these techniques are unlikely to do anything other than the opposite of that intended by coercive or ‘enhanced’ interrogation.”

Needless to say, all of this evidence strongly suggests that John McCain (who experienced torture as a POW during the Vietnam War) was right when he told the Senate that the use of torture “actually damaged our security interests, as well as our reputation as a force for good in the world.”

That last phrase—“our reputation as a force for good in the world”—is particularly instructive. For all of America’s faults, we used to have a reputation for taking the high ground. During World War II, for example, our military intelligence specialists understood that it was important to choose interrogation methods that played to the psychological weaknesses of their subjects.

“You don’t get people to talk by beating them or waterboarding or anything of that nature,” explained former Nazi-interrogator Rudolph Pins to CBS News. Pins and his colleagues, who were hired to extract information from captured Nazis, understood that the ideal strategy was to trick prisoners into letting their guard down. Pins said that he would get his prisoners to talk after making life for his prisoners “fairly easy,” causing them to relax. Once he introduced the prospect of losing their current cushy conditions (such as, in the case of World War II, being handed over to the Russian military) sets in, the secrets spilled.

Of course, this isn’t the only way to obtain quality information. Returning again to America’s interrogation of Nazi prisoners during World War II, former Air Force interrogator and trainer Steven M. Kleinman told the Atlantic that questioners at Fort Hunt “had graduate degrees in law and philosophy, spoke the [German] language flawlessly” and spent hours preparing for questioning. As a result of this superior preparation, they were in a position to develop an intimate familiarity with their inmates and, as a result, use their status as captors to gain the upper hand in conversations even with the staunchest hold-outs.

Setting aside the fact that precedent exists for the existence of superior alternatives to torture, the bottom line is that when America became notorious for its use of torture, our nation’s moral reputation (the one to which McCain alluded in his speech) took a major hit. A fundamental respect for the dignity of human life is the bedrock of all meaningful democratic government; after all, a state that allows people to vote but doesn’t value their lives can very easily become the hostage of a tyrannical majority.

It’s one thing to consider non-citizens as lesser people in our handling of foreign affairs (such a move is often necessary for practical reasons, as evidenced in the differences between our military and civilian judicial systems), but it’s quite another to decide that the ostensibly universal values we profess in our everyday life can be suspended during periods of crisis.

The problem isn’t that the use of torture forces us to sell our souls in the name of protecting freedom. On a deeper level, the problem is that it perpetuates the misconception that freedom can exist in any meaningful sense without a humanitarian moral foundation. When we try to break our own rules to preserve our freedom, we inevitably do far more damage to it than any terrorist attack ever could.

It’s time to #CloseGitmo, once and for all.