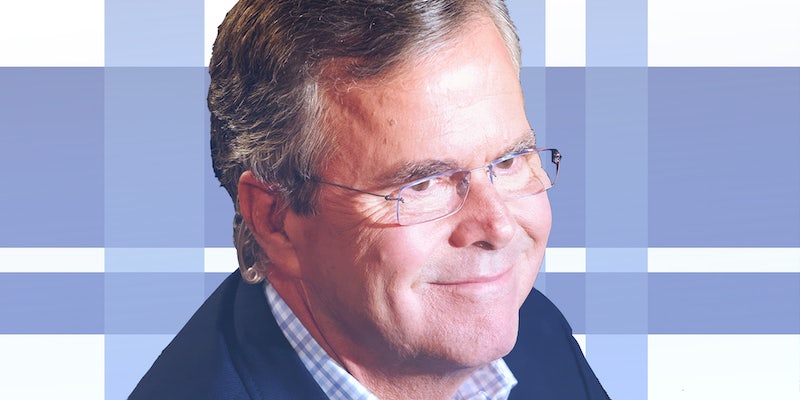 Dude changes name to ‘Jeb Bush’ on Facebook, finds out he can’t switch it back

This guy does not beat around the bush.

If you hadn’t heard by now, our dearest Jeb Bush dropped out of the 2016 presidential election this past weekend. It’s terrible! Now who will beg for pity claps or tweet incredibly awkward, confusing, unsettling pictures of guns? Fear no longer—for another Jeb! has risen.

A 20-year-old New York University student (who at this time would like to remain anonymous) changed his Facebook name on Sunday to none other than “Jeb Bush.” However, he soon realized that he could not revert back to his own moniker thanks to a Facebook policy that requires you to wait 60 days to change your name again.

He told a closed Facebook group of the predicament in which he found himself.

Ruh-roh. And it seems like Jeb has begun to take control of this young man’s consciousness—much like in the Goosebumps book The Haunted Mask, where a monster gradually possesses the teenager who wears its horrific face. But this demon looks like a presidential dropout.

We caught up with the youth, who struggled to keep his true self intact—but it was no use. Whatever questions we asked him, he responded as Bush.

Why’d you change your name to Jeb Bush on Facebook?

Well, now that I’m out of the race, I don’t really have to act all professional and shit anymore, and I can get back to having a sick social media presence. You know, messaging hot girls I find, posting dank memes for all my friends, sharing short recipe videos and all that. I only ran because I’m jealous of my dick younger brother for getting my dad’s name and his old job. I mean come on! I’m the older one. Anyways I thought I was for sure gonna win… What happened to good old-fashioned political nepotism??

What was your reaction to the fact that you wouldn’t be able to change it back for 60 days?

How might you use this newfound power/curse to your advantage?

The name recognition is really helpful with getting girls.

What do you think of Jeb dropping out of the race?

I will return in 2020, stronger and better than ever. Jeb is love, Jeb is life!

That kid who changed his name to Jeb on Facebook.

Who should Jeb support for president?

I’m going to write my own name in on the ballot because I still believe in myself even if no one else does.

Photo via Michael Vadon/Flickr (CC by 2.0) | Remix by Max Fleishman