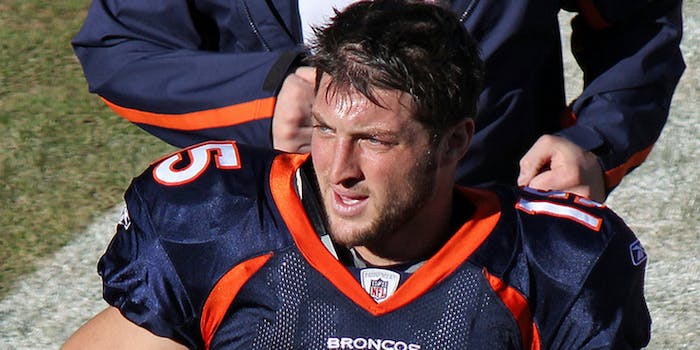 But hey, we had some good times Tebowing.

When Tim Tebow signed a one-year deal with the Philadelphia Eagles this week, Twitter predictably exploded with joy—mostly for ironical reasons but there was plenty of happiness, nonetheless. We haven’t seen Tebow throw one of his wobbly passes in the NFL since 2012, and though he somehow won a playoff game for the Broncos during the 2011 season, he was jettisoned to the Jets before failing in a tryout with the Patriots.

Now, his career has risen from the dead, and even though it’s a somewhat ridiculous notion that Tebow will have any kind of impact on Philadelphia’s squad this season—if, that is, he even makes the team out of training camp—Tebow sparks interest simply because he’s Tim Tebow.

Which led veteran NFL kicker Jay Feely, a man who spent 14 years in the league, to tell Jim Rome that Tebow is the worst NFL quarterback he’s ever seen. And he’s got a pretty good story to prove that notion.

For those who don’t know what throwing “routes on air” is, it’s when a QB is practicing or warming up before a game and he’s not throwing against any defensive players. It’s basically pitch and catch with his receivers, and if a QB is throwing 13 incompletions during that practice, that’s not such a good sign.

But Feely isn’t necessarily alone in his thinking. Though you didn’t hear much negative from players who competed with him about his personality or about his faith, it also wasn’t difficult to discern what they thought about him as a player.

While he was competing with Mark Sanchez to win the starting Jets QB job in 2012, a number of anonymous players ripped Tebow to the New York Daily News, saying things like Tebow was a “terrible” QB and “we can’t win running that shit.”

Even former Jets offensive lineman Matt Slauson said on the record that of the team’s two backups (Greg McElroy and Tebow), “We have Greg . . . and we have an athlete.”

One of Tebow’s teammates in Denver also weighed in on his abilities telling CBSSports.com (via Pro Football Talk), “I feel really, really bad for Tim. He’s a good person, just not an NFL quarterback.”

And OK, maybe some people didn’t appreciate the public way he talked about his faith.

Still, he managed to win a bunch of games for the Broncos in 2011 and was a big reason they surprisingly made the playoffs after coach John Fox dumped starting QB Kyle Orton midway through the season.

It was actually one of the most surreal storylines I’ve ever covered in the NFL, watching Tebow play so poorly for most of the game week after week before somehow figuring out a way to lead Denver to an impromptu victory. It was exhilarating and perhaps miraculous. It also won’t likely ever be repeated by Tebow.

As NESN wrote after Tebow signed with Philadelphia:

That is, only if Tebow is good enough to make it to a preseason game. Tom House, Tebow and [Patriots quarterback Tom] Brady’s shared throwing coach, reportedly convinced the Eagles that the Heisman Trophy winner’s motion has improved. Tebow wasn’t able to shake his long, three-quarter throwing style while with the Patriots. He also found himself rolling out, scrambling and freelancing in what should have been simple 7-on-7 reps in practice, so even if Tebow’s motion has improved, it’s entirely possible his inability to read coverages hasn’t. Yet Tebow’s getting another shot in the NFL two years later.

Yes, and the coverage shall be glorious as long as Tebow is employed by the Eagles.