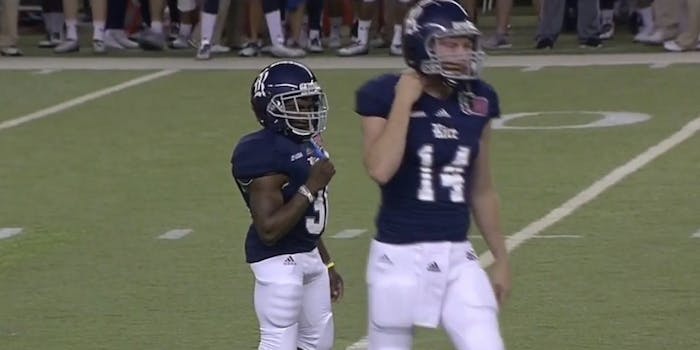 This 4’9” football player is the real-life Rudy

4'9" Rice running back Jay Carter ends his career with a carry.

A bit more than 40 years after the inspirational story of Daniel “Rudy” Ruettiger made headlines for one man’s persistence to be a member of the Notre Dame football team, Rice’s 4’9” running back Jayson Carter was handed the ball in the fourth quarter of his team’s 30-6 win over Fresno State in the Hawaii Bowl.

Carter, a 140-pound junior walk-on, proceeded to cut around the right side of the line for two yards before being met head-on by the Bulldogs’ strong safety, 5’11” Charles Washington, who had a 57-pound advantage over the fearless RB. Carter did have one previous carry during the 2013 season against UTEP.

After being a member of the football team for three seasons, the Hawaii Bowl marks Houston native Carter’s last game for the Owls as he graduates in May 2015 with a computer science degree. If Hollywood latches on to his story, Kevin Hart, only six inches taller than Carter, would be right man for the role.