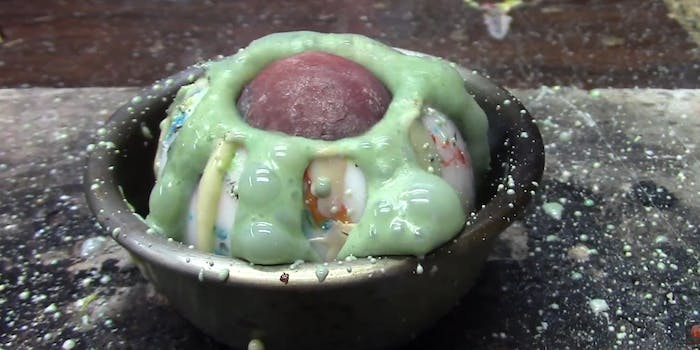 Making it to the center of a Jawbreaker—also known as Gobstoppers, depending on your location—is a rite of passage for many kids around the world. It takes courage, patience, and determination to complete such an epic task. Or, if you happen to have a red-hot ball of metal handy, that seems to work just as well.

YouTube user Carsandwater gave his red-hot ball of nickel a sweet treat and it made quick work of the candy, melting its way from top to bottom in just a matter of minutes, and leaving a path of destruction in its wake.

There are a few surprising moments in the brief footage, from the loud popping and vibrations that the ball first produces, to the violent bursts of fire that shoot forth once the metal reaches the core of the candy. By the end, the only thing left is a hollow, sugary shell and a whole lot of sweet molten sludge. Yum?