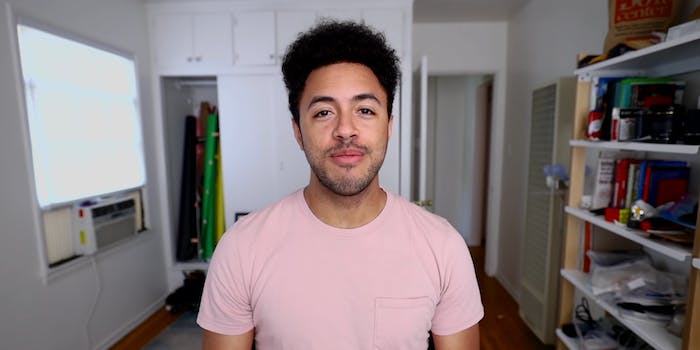 'I haven't tested the boundaries of where my audience will go with me.'

Five years ago, YouTube commentator Jarvis Johnson attended VidCon—but not as a creator. He was there for work, as a software engineer for Patreon. Soon after, he decided to start his own YouTube channel.

“I went to a few of the panels in our free time and started the channel,” he said in an interview. “It was just, you know, making a video here and there on a weekend, but it was like a video every couple of months or something for a while.”

When he started his channel, he made software engineering videos. His co-worker at the time, tech YouTuber Mayuko, had done a “day in the life of a software engineer” video and received over 1 million views, so he decided to do something similar. It was content that he knew he could do, but not necessarily content he wanted to do. The tech stuff was good for building an audience quickly, but they wouldn’t stick around for other content. Johnson used his videos to tell stories about his life, but his audience wasn’t interested.

“I was making a video, it was called, ‘How I got a job at Google by failing my interview,’ and it’s me being goofy,” he said. “And it’s a story that I’m telling. A lot of people were coming to that going, ‘I want to work at Google. Just give me the information. Don’t give me the jokes. What are you doing?’”

In mid-2018, his channel started picking up steam, and he was faced with a choice: stay at his job or start creating full-time. He hadn’t really considered leaving Patreon up to that point, but he said at a certain point, the idea started formulating in the back of his mind. The way he was creating and balancing his job was unsustainable: waking up at 6 am to shoot videos, walking into the Patreon offices by 10 am, working a full day, then thinking about new content ideas at home.

“I wan’t letting anything go and that was at the expense of my own health and wellbeing,” he said. “I think I reached a point where I was like, I can’t keep doing both. I need to choose.”

By September 2018, he put in his four-month-notice—he had several work projects to wrap up and wanted time to make sure he was making the right decision—then pivoted to focusing on his YouTube channel.

“The leap of faith being, ‘Oh, if I were actually creating more regularly, this income would be sustainable to some degree,’” he said.

Before he quit his day job, he wanted to change the kind of content he was making. After watching a video from fellow YouTuber Drew Gooden, which he described as “stand-up comedy except it’s about weird internet stuff,” Johnson wanted to try this kind of format. He started by making a video reacting to 5-Minute Crafts, a YouTube channel featuring ridiculous life hacks. The tech audience didn’t like it, and the video performed poorly at first.

“The way that YouTube analytics work, I was like, ‘Oh, I’ve made a mistake. I should never make this content again,’” he said. “But knowing that YouTube is always experimenting with your content, I was looking for opportunities to change titles and thumbnails to make them more compelling.”

He saw a similar 5-Minute Crafts video from another YouTuber, Cody Ko, and noticed Ko’s video title featured the life hack channel’s name in it. Johnson hadn’t considered putting “5-Minute Crafts” in his title, so he updated it with the name.

“A few days later, it got picked up in the algorithm and got a few million views over a couple of days,” he said. “And it was more views than any video that I’d ever made.”

At this point, Johnson had to decide what content he was going to make. He didn’t have anything in his library of videos like the 5-Minute Crafts one, so the new audience he attracted didn’t have similar content to go back to. He had to either continue making videos for the tech audience or build a catalog that appealed to this new one, and he chose the latter. He made another reaction video to a channel called Troom Troom, and it received another few million views. The rest is history.

This pivot, of course, came at the expense of his tech audience. Johnson wasn’t particularly saddened by this, since tech content wasn’t really what he was passionate about. He said he’s always loved comedy and wanted to try doing more to create more entertaining content, rather than educational videos.

“It seemed like a bit of a strange pivot, I’m sure, externally,” he said. “But it was, for me, being more true to myself.”

Before he quit Patreon, he’d already started making these comedic videos about internet trends. When he finally did leave, he had already built an audience of over 300,000 subscribers. Now, he has 1.83 million subscribers on his main channel, as well as four other YouTube channels, a Twitch stream, and a podcast called Sad Boyz with Jordan Adika.

Since Johnson started creating full-time, the commentary genre has grown substantially. The popular content ranges from comedic reactions to cultural criticism to multi-hour explainers. When asked how he’s seen the niche evolve, Johnson said that he thinks creators have gotten better at toeing the line between punching down and making jokes and critiques in good faith. He also said that the space has become more diverse in recent years, with more women, femmes, and creators of color garnering sizable platforms. He often collaborates with newer creators and has done videos with channels like Nickisnotgreen and Chad Chad.

“I think that it’s important moving forward for… the elder statesmen, or the incumbents of this space, to platform these people and sort of signal boost these people to help make the space more representative,” he said. “And that’s encouraging to see at least the beginnings of.”

Johnson privately tries to make himself accessible to smaller or newer creators in the space. He doesn’t believe that the industry should be so opaque when it comes to sponsorships, and he tries to provide resources for up-and-coming creators to succeed. When asked if he believed it was difficult to start a new channel in such a popular space today, Johnson said there’s no time like the present.

“In 2017, I was going to panels titled, ‘Is it too late to start your channel in 2017?’ so it’s never gonna be too late,” he said. “You know, Chad Chad just hit a million subscribers and she started her channel last year. So, absolutely not. It’s not too late. You should definitely start if you’re considering it.”

Johnson said the important thing to remember is that everyone brings a unique perspective, informed by their distinct life experiences, to the table. He also advised aspiring creators to be comfortable with making bad videos and to not be too precious about making things. It’s all about gaining experience in making things.

“You may not like your stuff—maybe that’s because of the quality of it, maybe it’s because of the gap between your idea of what you were doing and the execution of it,” he said. “That’s a big thing I struggle with. Get over that, and just push through it.”

Most importantly, Johnson said creators should enjoy themselves. People should make the content they like, otherwise, they might get stuck doing something they don’t. Johnson knows this from experience, but luckily, the risk of pivoting his content from tech to comedy has clearly been rewarding.

Before he can help others, however, he has to help himself. His main goal right now is focusing on what’s next in his creative journey. He said he’s been in a rut since 2019 when he started creating full-time, although it might not be obvious to his audience given his videos average about a million views per upload. This was exacerbated by the pandemic, which Johnson said severely impacted his mental health. Without a routine or new stimuli, he was uninspired and struggling to create. Now, as the pandemic eases up and people are more able to do things they used to do, Johnson is starting to figure out what he wants. He’s starting by improving his personal life by creating a better balance and making time for friends. As for the content, he isn’t quite sure what it is he ultimately wants, but he’s still enjoying the work in the meantime.

His biggest struggle in creating on his main channel is feeling afraid to post videos that “aren’t good enough.” He has a document for brainstorming, and he said he sometimes tosses out fun ideas out of fear they’d underperform.

“The algorithm conditions you to do the same thing over and over,” he said. “That’s what’s scary. Because I don’t know. I haven’t tested the boundaries of where my audience will go with me.”

His second channel, Jarvis Johnson! GOLD, and his Twitch are sort of remedies to that. Through those avenues, he posts things a little more freely. He said a main goal of his is to “get weirder and get more out there” and feel more comfortable taking risks.

“There’s higher highs to discover but I have to like really put myself in the uncomfortable places to discover those highs,” he said.