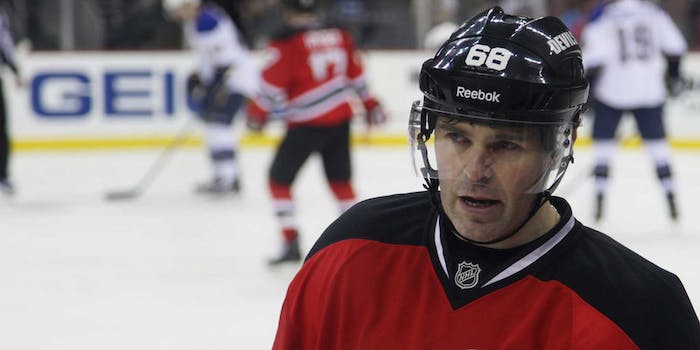 Who thought this plan could have worked?

When you’re a celebrity who likes to have sex with people who aren’t celebrities, you have to be on the lookout for the partner who may snap a selfie after you’ve fallen into a post-coital coma.

It happened to Justin Bieber in 2013. It happened to NBA star James Harden. It happened to Super Bowl champ Julian Edelman. And it’s why the security details of some mega-celebrities reportedly take a potential hookup’s phone before the intimate encounter so the star won’t be caught in a compromising situation.

But NHL legend Jaromir Jagr? Jaromir Jagr doesn’t care one iota if the 18-year-old model with whom he’s just, um, connected snaps a candid post-sex selfie. And furthermore, the apparently single, 43-year-old Florida Panthers right winger reportedly won’t care if you try to blackmail him with it for the princely sum of $2,000.

He’s not paying any kind of ransom. Therefore, the community at large received this gift.

The model is said to be dating a Czech hockey prospect named Dominik Rudl, who apparently has said that Jagr was his idol. So this flap is not great news for Rudl, and it’s not great news for the model, who has seemingly now been caught cheating without making any money off of it.

It is, however, rather fortuitous for everybody who wanted to use the Instagram hashtag #JagrSelfie.

Jagr hasn’t updated his Twitter page in a couple months, but it’s telling that his last tweet described how he doesn’t usually get excited about photo opportunities. Unless it’s with LeBron James, of course.

I don't get too excited about photos, but this is special. Me and LeBron James. He's the best and my favorite. Cavs#1 pic.twitter.com/NOcyvrDRrE

Guess that unlucky model is nowhere near James’ league.