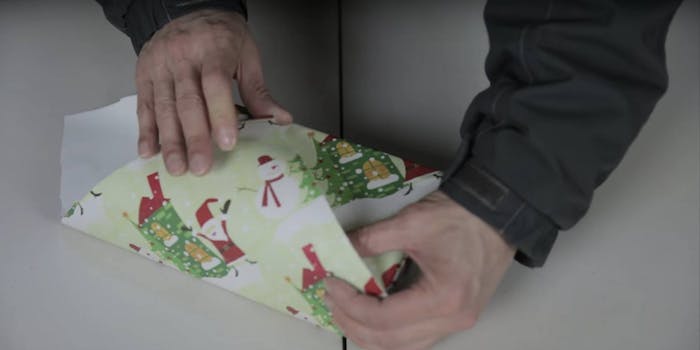 Japanese gift-wrapping ‘hack’ will save you tape, but zero time

This method looks gorgeous, but it requires careful planning.

The internet is captivated by shortcuts, efficiencies, and so-called “life hacks.” The latest one sweeping the tubes is a magical technique for wrapping presents that hails from Japan.

It’s easy to see why we’re enthralled: With just two pieces of tape, this person manages to expertly wrap a box in less than 15 seconds. The resulting package has crisp edges and a cool diagonal seam down the back side. Here’s a slowed-down tutorial if you’re having trouble keeping up:

But what both of these magicians leave out of their act is the part where you have to dig your wrapping paper roll out of a back closet and cut a strip to fit the box in question; they’re using pre-cut sheets, which feels like cheating. And they’re tackling straightforward narrow boxes rather than the irregular packaging that so many gifts come in.

Our recommendation? Buy a frickin’ bag and call it a day.