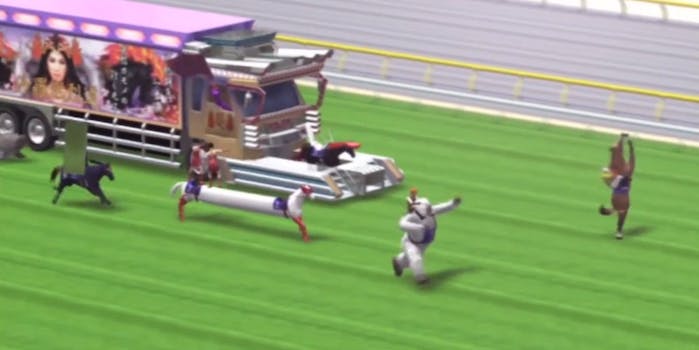 ‘Japan World Cup 3’: Everything’s made up and the points don’t matter

Japan's reputation for all things WTF is well-earned, and Japan World Cup 3 proves it.

Over the years, Japan has earned a reputation for producing some of the most bizarre and highly entertaining content on the planet. Thanks to games like Japan World Cup 3, it’s easy to see why.

Originally released in 2011, Japan World Cup is a computer-generated Web browser game in which players bet on the outcomes races that feature jockeys riding anything from a Trojan horse to a Yeti. In 2012, these predetermined scenes were compiled into three DVDs (a copy of Japan World Cup 3 can be purchased for $34.49 on Amazon).

To say that the racing sequences are absurd would be an understatement. In May 2013, Hightower and AxialMatt of the Achievement Hunter Community Video channel uploaded a five-minute clip with footage from the third DVD to YouTube. The insanity of the game—which features a horse on its hind legs doing the Charleston as well as a limousine equine with multiple naked jockeys on its back—coupled with the hilarious reaction heard on the voice overs, is a great recipe for laughs.

On Sunday, the clip was unearthed and posted on Reddit‘s r/videos, where it has received more than 2,840 karma points and has stayed on the front page of the subreddit.

The redditors’ reactions to Japan World Cup 3 were basically the same ones I had.

“I mean, I accept wtf out of Japan on a daily basis, but this… I don’t even. How tf is this a ‘game’?” asked a baffled fatkiddown.

“Get DVD, TV, friends, beer,” suggested Smachface. “Bet sips of beer (for added fun, create and print Horse Bux in MSpaint for throwing and stacking. Have the best night.”

That’s precisely what I’ll be doing this Friday.