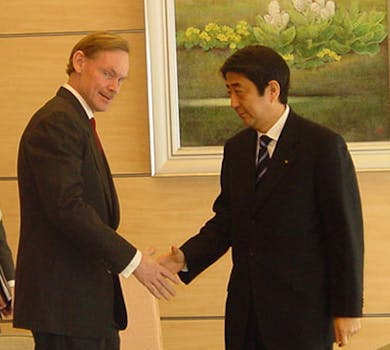 Japan joins the trade agreement that could ruin the Internet

One woman's nearly 40,000 tweets have gone ignored: Japan has announced it is joining the Trans-Pacific Partnership (TPP).

One woman’s nearly 40,000 tweets have gone ignored: Japan has announced it is joining the Trans-Pacific Partnership (TPP).

That’s bad news for a host of activists, including those who fear the sweeping international trade agreeement will harm the Internet. Negotiated among a dozen nations, the TPP includes a chapter on intellectual property that would standardize copyright between them  all—making it much harder for individual nations to change their own copyright law.

While we don’t know what the most recent version of that IP chapter says (trade negotiations are classified), a leaked earlier draft made it clear that Internet service providers could be given legal incentives to police their own customers for copyright infringement. And there’s no reason to think that the situation has gotten better for the Internet since: In the past two rounds of TPP negotiations, Internet activists were banned from the premises, then didn’t attend at all.

The TPP’s members include the U.S., Australia, Malaysia, and Vietnam; it’s no surprise that Japan would want to expand trade relations with such nations. “We expect a positive effect on our economy as a whole,”  Japanese Prime Minister Shinzo Abe said in his formal announcement that the country was joining.

Abe’s decision apparently came down to the wire, as he claimed Thursday he was still deliberating. “Regarding the final decision […] on whether we will participate or not, we have no choice but to make it,” he said, as “there is not much time left.”

The TPP’s 16th round, held in Singapore, concluded Wednesday, and the U.S. is optimistic the agreement will be finalized this year. The 17th round starts May 15 in Lima, Peru.