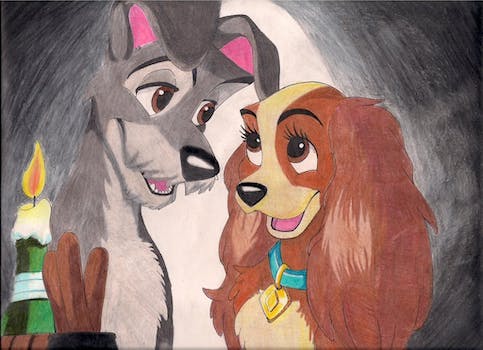 Finally, a normal OKCupid date. Or is it?

Despite flops with Emaciated Rocker and Middle-aged Raver, I was determined to keep on keepin’ on. Online dating was my new Everest, and I refused to give up just because it looked insurmountable (although I also began researching arranged marriages and hinting to my parents that they could do some of the work if they were serious about wanting grandchildren).

Finally, an OkCupid message came in from a guy who sounded nice—e.g., instead of begging for sex, tossing out a half-hearted, “Heeey,” jumping on the train to Asian Fetish Town, or sending me a well-crafted insightful note that turned out to be a copy-and-paste job (“Quantity AND quality,” the offender bragged when I called him out on it), his message was normal. Like, ok-to-speak-to-someone-this-way-IRL normal.

Naturally, this made me suspicious. Who sounds normal on this site? I searched Google images for serial killers that have been set free to make sure Normal Guy’s pictures didn’t look like any of them. Speaking of his pictures, those were normal too. He wasn’t shirtless and flexing while taking a selfie. Nor was he a creepy old guy holding onto a young child while grinning creepily (have I mentioned how creepy this is?).

We exchanged a couple of fun messages that triggered zero alarm bells, then made plans to meet for drinks. Was this how Goldilocks felt when she tried the porridge that was just right? I tried to quell the naive hopefulness by doing some pre-date training.

My pre-date training was to correct my obvious and recurrent problem of blurting out a panicked “yes” to extend dates, despite many strong indicators I should run in the other direction. So it consisted of practicing “no” in a number of ways: from a perfunctory “Noooope!” with vigorous head shaking, to the friendlier, “Oh I’m sorry, I have to run.” My new mantra was, “No-ing is half the battle.” I also practiced running, and decided to wear low heels. Quick getaways are underrated.

We met at a cool bar with a speakeasy vibe, all gleaming dark wood and large antique mirrors with flecks of gold in the glass. Normal Guy was already there and stood up when he saw me approaching. What a gentleman! Plus, I got to see how tall he was, about 6 feet. He looked right at home in his dapper outfit: classic crisp white button-down, tailored vest, dark blue jeans, and polished wing tips in a golden light brown color. He gave me a hug hello, and I could feel strong, lean muscles beneath the thin fabric of his dress shirt.

I swooned, but tried to keep cool on the outside. 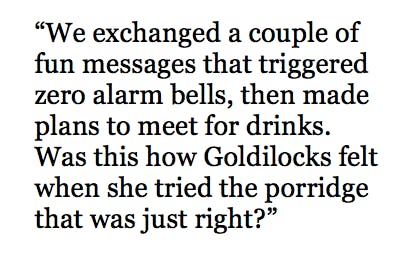 We sipped and shared our perfectly mixed drinks, nibbling on housemade cheese straws set out on the copper bar. Things were going well, so when the question about transitioning to dinner came, I didn’t have to call upon my rigorous “no” training. He suggested a restaurant in the neighborhood that I’d been meaning to try for months. Ding, ding! More bonus points for good taste. Maybe I was finally getting the hang of this!

A leisurely 10-minute walk later, we were seated at a farmhouse table inside a cozy rustic restaurant decorated with wildflower bouquets in mason jars and small candles. The hostess places a tin of freshly baked popovers nestled in wild honey between us, and our fingers touched as we both reached eagerly for the warm bread. It gave me a thrill, this innocent unplanned touch, and I smiled at him. Was this our Lady and the Tramp moment?

Normal Guy didn’t look up at me, though. He was furrowing his brow slightly as if concentrating on something important. Disappointed, I retrieve my hand and hopeful glance. At least I had carbs to drown my sorrows in.

“Did you try the honey?”

I perked up for a second. The desperate part of my subconscious pretended that he had called me honey. Luckily, I realized what he really said before I did anything embarrassing (like cooing, “No, you’re the honey!” and grabbing at his face with my sticky fingers). We sat and munched in companionable silence until the tin was empty. Fresh, fluffy popovers drenched in warm, thick honey were a damn good distraction.

We regained some of our earlier camaraderie as we browsed the menu and wine list. Normal Guy showed off his great taste with a flourish, chatting about various pairings and flavor profiles without sounding too pretentious about it.

“How’d you learn so much about this?” I asked after we ordered.

He sat back in his chair and smiled wistfully. “My friend Scott taught me.”

I nodded, waiting for more, but he grew silent again. Fair enough, time to practice my being selfish conversational skills. I started telling him funny stories about working in publishing and was happy to see him relaxing and laughing along. I had forgotten about the weird bread moment as I leaned in closer, absorbed in the description of one particularly crazy author, making faces to convey what words would not. Suddenly, he gave me a long considering look and leaned in to kiss me over the table. It was a warm peck, just the plump parts of our lips pushing against each other lightly, and then it was over. He sat back in his chair again and smiled politely at me.

“That was nice,” he said. And then the food arrived, and he changed the topic quickly like it hadn’t happened. I was simultaneously confused and ecstatic. He kissed me! I was having a good time! And yet… something was off. When I reached for the salt, he hurriedly moved his hand away. When I leaned in again, he leaned back, maintaining an invisible ruler’s distance away from me like we had a chaperone in the room.

Logic told me that I couldn’t have messed up on such a small kiss, but it was starting to feel like I had. However, he was good company, and we really were getting along well. So far, it was the best OKCupid date I’d been on, despite this strangeness that I couldn’t quite figure out.

Then he upped the ante. “So, my cousin is getting married next month.”

I nodded, waiting to hear the crazy bachelor party story or some sort of bridezilla gripe. Anything but what came next.

“I had such a great time tonight, that I thought you’d like to come.”

I blinked. I guess I looked pretty confused because he thought he had to clarify, “…as my date.”

“Oh.” I continued to blink rapidly.

“Oh, I understand.” He looked down with a bit of a red face, and I realized he thought I had just said “No” instead of “Oh” (guess my training regimen worked).

“No, he was shaking his head. “It was a dumb idea. My family just asks so much about who I date, and it would’ve been nice for them to meet someone like you.” He was mumbling so quietly that I could hardly hear him. It didn’t even seem like he was talking to me anymore.

What the hell did “someone like me” mean? Did he date strippers? Oh God, maybe he was a serial killer. I mentally prepared to walk to the subway station with my keys out, ready to defend myself. Suddenly, my pre-date practice running didn’t seem that silly.

As we walked back out into the chilly night, he held both of my hands, looking intently into my eyes. Taking a deep breath like he was preparing to take medicine, he closed his eyes and kissed me again. It was like the peck at the table, except that he pressed his lips against mine a bit more earnestly, clutching onto my hands tightly for moral support.

The kiss ended quickly, and I peeked one eye open to look at him. He was doing the same thing. We burst out laughing like a couple of rambunctious pre-schoolers and said good night. It was clear we had no physical chemistry. And that was that—no hard feelings, just a good date that didn’t turn into anything else.

A few days later, I was recounting the story to my good friend, the Dating Veteran. Before I’d even finished, she diagnosed it.

“He’s gay. He won’t admit it. So he dates girls and pretends that he hasn’t met the right one yet.”

“But he invited me to a wedding.”

“Yeah, so his family could meet a girl.” My friend shrugged.

My jaw dropped. I didn’t bother picking it up as I ran back through the night for clues I might have missed. Things like the appreciative glances he’d given the bartender, and the brush of his hand against the man’s arm when he complimented the drinks. He’d flirted more with that guy than he had with me, and I’d ignored it! Turns out Normal Guy was indeed normal; just not with girls.

“Have you been on a lot of these dates?” I asked my friend.

“Sure,” she grinned. “They’re the best: perfect gentlemen, eager to leave women thinking of them as a great catch. If you know what it is, you can have the best time!”

I nodded slowly. I had ignored some signs that night because I’d decided beforehand what to believe about the guy. Next time, I would have to be more open to seeing the truth. And honestly, it probably would’ve made for a better evening for both of us.