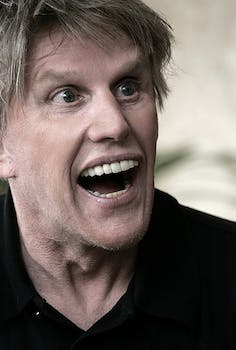 This is a date, not a therapy session.

After one false start with OkCupid, I was beginning to rack up a few nice dates. I’d learned to vet profiles and messages more carefully, never investing too much time into any one person. It got fun, like online shopping for the perfect boyfriend.

The formula I worked out was roughly two to three sentences per message, three messages tops, before we either lost interest or agreed to meet. It felt like a very calculated approach compared to falling in love willy nilly with good guy friends (my modus operandi since the age of 16), but it was time for a new approach. After all, I was still single and yearning for lasting love, which meant that I needed to change something about the way I was handling things.

Even though I was now navigating the waters of online dating a little better, the actual physical dates still presented a steep learning curve. Certain positive traits have become a liability instead of an asset. The one in particular that has tripped me up the most is being a good listener. Curse my perfectly timed nods and murmurs of sympathy, journalist-honed skill with follow-up questions, and social politeness that prevented me from steering conversations to myself or neutral territory. It might make me a good friend, but dammit it’s ruined some promising evenings. Many dates turned into impromptu therapy sessions for the guys, while I’d go home feeling drained and a little used. 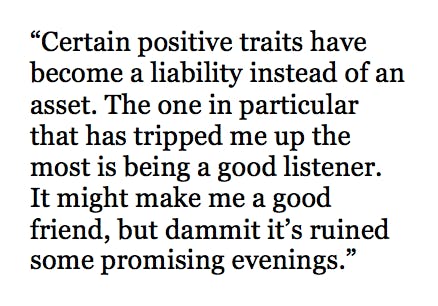 The most extreme example of my growing amateur therapy practice was my date with a 42-year-old man. I was skeptical when he first messaged me, unsure about the age difference (nearly a decade), but tried to keep an open mind. “I’m young at heart,” he cheerfully assured me. I decided not to be an ageist and agreed to meet for one drink. Maybe it wouldn’t be horrible to meet someone more mature and settled into his life, I thought. At least he’d be less likely to use me as a (very irresponsible) career counselor.

I showed up first—new for me since I’m 20 minutes late to everything. This led to a fun game I call, “Are you my date?” I walked around the entire bar, including the curtained and cozy back room, leaning in and peering at the faces of all the men.

Identification is difficult because people use outdated photos on their online dating profiles, either oblivious or unwilling to admit that they’ve gained weight, lost hair, become emaciated from the moving-to-New-York poverty diet, changed gender, gotten face tatts, or have just plain gotten older. Knowing that, I looked much more closely at all the guys than I would have under normal “I know who I’m meeting” circumstances. Which, of course, made me look like a complete creep .

I made one complete circuit, leaving confused men and annoyed girlfriends in my wake, and returned to a seat at the very front of the bar. It was now 30 minutes after we were supposed to meet, and I was tempted to just grab my coat and go. A blond man with overly frosted hair, artificial-orange tan, face-lifted tight skin, and a blue-and-white floral shirt smiled at me. I noticed his large white teeth, shaped so perfectly straight that they looked like Chiclets, and that he looked like a caricature of my date’s profile pictures. Oh crap. He was my date.

He stood up while continuing to grin at me, and I realized that he could see me staring at him. (Online dating sometimes makes me forget that people can see me.) He seemed relieved that I’d shown up, and happy that I matched my profile pics and description, so I couldn’t quite get mad at his tardiness. It would’ve been like kicking a puppy that was wagging its tail. A puppy who’d opted for a few too many cosmetic procedures, but still a friendly puppy.

We ordered our drinks and chatted about how crazy the weather was lately and museum exhibits we’d seen (after years in New York City, these are still the fail-safe topics for every occasion). With a false sense of good-dateness created by our unobjectionable conversation and warming drams of alcohol, we agreed to continue the night with dinner.

There is something about sitting down at the dinner table that makes my dates begin to air their crazies. Perhaps it’s the knowledge that I’ll be a captive audience for the next one and a half hours. Amid the discussion of appetizers and mains to try and share, he started talking about himself: how underappreciated he was at work, and how he felt like he was still in his 20’s, and how the world shouldn’t be putting pressure on him to conform. He managed to order food during the end of his monologue, and I watched our patient waitress decipher dishes amidst his litany of life complaints. Then she walked away. Lucky girl.

I gulped down the last of my sweet alcoholic salvation and waved an arm desperately for more. There was a lull in the conversation, and I realized he was waiting for me to say something. I clutched at the straw of his last sentence. “What do you mean, conform?”

“I went raving with my lesbian friend last weekend,” he said, as if that explained everything.

“Oh… Do people still rave?” I asked. (Dear Lord, give me the strength to stop asking questions. Teach me to be selfish in conversations. Oh please, teach me.)

He nodded eagerly. “Lesbians do! I do!” As he flashed his big fat crocodile smile, I wondered if his overly white teeth glowed by blacklight.

I struggled to find a common point of connection. “Great, umm… I like to dance, too.”

“No. It’s more like,” he closed his eyes and swayed as he searched for the right words, “being a conduit of the music.” He demonstrated his conduit-ness (conduitivity?) by flicking his hands together in a semi-rhythmic circle. “See what I’m doing?”

I did see. So did everyone else in the restaurant turning their heads to watch the creepy close-looker girl with the 42-year-old raver.

“I’m creating a ball of light with my energy.”

I decided to try, try with all my might, to bring this conversation back to the same planet I inhabited. “Oh yeah, I’ve tried tai chi, where they teach you to channel that energy.”

Excuse me, dude? You’re discounting my experience of an ancient culture because raves have been so meaningful in your life? I think my hand twitched because it tried to slap him, independent of my rational mind and its pesky awareness of social mores and jail time for aggravated assault (very aggravated).

The food arrived, and I reverted to my shoveling-food-in-face technique (patent pending). We shared a few minutes of communal silence and bites of our dishes. Everything was delicious, which made me like him better. Then he cleared his throat and began to explain once again, in greater detail, the various ways he was underappreciated at work.  At this point, it was going so poorly that I just decided to lean into it. Why not. Once again, I went into therapist mode, asking what he was proud of and how he’d like to be recognized.

By the time I was adamantly refusing dessert, I’d managed to inflate his sense of self-worth while deflating my own will to live.

The next day, Croc Teeth seemed genuinely surprised that I didn’t want another date. I realized turning our date into amateur therapy theater had lead him on, in a way. And why shouldn’t it? Although it wasn’t touchy flirting, or coquettish eyelash batting, I’d had an active role in the path that conversation took. I’d seemed interested, engaged, invested in his future, even. His raves.

So, another lesson learned in my online dating crash course: I need to be a little bit selfish. Hell, the guys sure don’t seem to have a problem doing that. At the very least, I’ll get to enjoy my dinners a lot more if I’m not resorting to gulping food down to avoid speaking. And best case scenario, my date would get to know more about who I actually am. Which is, after all, the whole point of all this.