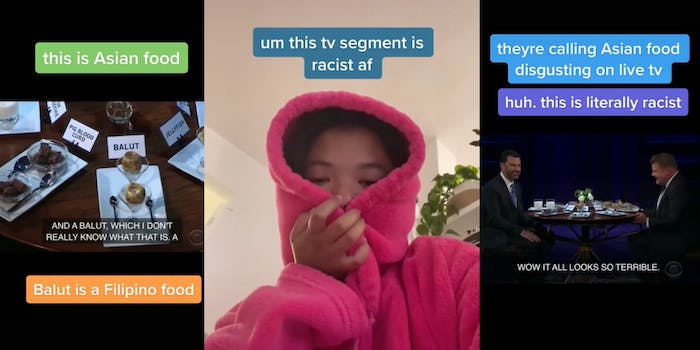 'There’s no need to make a public mockery of other cultures.'

A viral TikTok calling out a “racist” segment on James Corden’s late night show is prompting thousands of people to petition for it to be taken off the air.

Influencer and artist Kim Saira posted a series of TikToks showing clips from the “Spill Your Guts or Fill Your Guts” segment on The Late Late Show with James Corden. The premise of the bit involves Corden and his celebrity guest taking turns to either answer personal questions or eat so-called “disgusting” foods. Saira’s TikToks pointed out that the food Corden portrays as gross or unsavory are often popular Asian dishes. The videos have over 2.6 million views, collectively.

In one clip, Corden and Jimmy Kimmel are assessing their meal options which include the 1,000-year-old egg, a Chinese delicacy; pig blood curd, a dish served in various Asian countries; and balut, or fertilized bird egg, a Filipino snack. Kimmel says the food “all looks so terrible” while Corden calls it “horrific.”

“ok but this is actual Asian food & youre going on live tv telling people how gross it is,” Saira wrote in the caption. “thats cringe”

In another clip posted by Saira, Corden and Justin Bieber are going over their food options and Bieber is heard making seemingly disgusted noises with the introduction of each dish. Saira intersperses examples of how each mentioned food is used in Asian cuisines throughout the video.

The TikToks sparked debate in the comments about whether or not the segment was appropriate. Many viewers believed that the segment is racist, saying that it was mocking Asian cultures.

“They shouldn’t have gone on TV trying new foods just to say disrespectful and negative things about it and its culture,” said one viewer. “It is racist.”

“It’s blatant racism, it’s the disrespect of a cultural food, and even if you don’t like it there’s no need to make a public mockery of other cultures,” said another.

Others agreed that it is disrespectful but hesitated to call it discriminatory.

“Never thought of it as racism but VERY disrespectful,” said one person.

Saira created a Change.org petition to take the segment off the air and to hold the show accountable for the “perpetual harm this segment causes to Asian American communities.” Over 15,000 people have signed the petition as of writing.

“In the wake of the constant Asian hate crimes that have continuously been occurring, not only is this segment incredibly culturally offensive and insensitive, but it also encourages anti-Asian racism,” Saira wrote in the description of the petition. “So many Asian Americans are consistently bullied and mocked for their native foods, and this segment amplifies and encourages it.”

In a follow up video, Saira told viewers not to “cancel” Corden, saying that he is capable of owning up to his mistakes with “Spill Your Guts” and learning from them.

“Accountability culture > cancel culture,” wrote Saira in the text of the video.

“The overwhelming positive response to the petition (in my opinion) shows that there is so much support for this segment to be taken down or changed entirely. Like I’ve said in my posts, I don’t believe in cancel culture, but instead- accountability culture. I really believe that James Corden and the Late Late Show are capable of making change that can actually benefit Asian American communities, which is by changing the segment and recognizing the harm that it causes.”

The Daily Dot reached out to representatives for Corden.