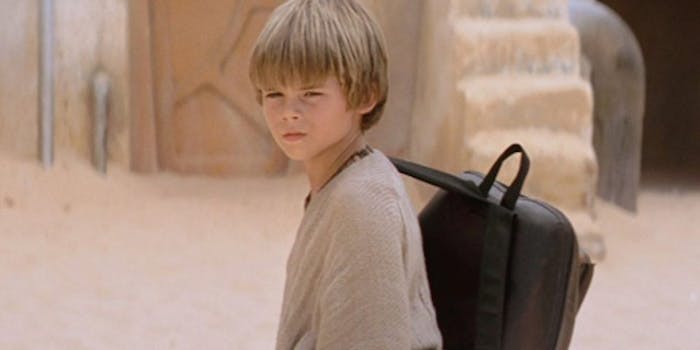 Fans think Jake Lloyd ruined 'Star Wars,' but the opposite is true.

The 26-year-old became famous after playing Anakin Skywalker in The Phantom Menace, the widely hated reboot of the series that introduced fans to midichlorians. Since the film debuted in 1999, it’s become common amongst the film’s Internet fanbase to argue that “Jake Lloyd ruined Star Wars,” but the opposite is likely true.

“My entire school life was really a living hell—and I had to do up to 60 interviews a day,” Lloyd told U.K.’s Daily Mail. “Other children were really mean to me. They would make the sound of the lightsaber every time they saw me. It was totally mad.”

Although he has since quit acting, Lloyd was in the news again Monday after reports that the former star evaded police in a high-speed chase before crashing his car. Lloyd gave his name as “Jake Broadbent” to the police likely to avoid becoming an Internet trending topic, but of course, he was anyway. Lloyd told the Daily Mail that he’s learned to “hate it when the cameras are pointed at [him],” but in the age of digital media, that camera is all but inescapable—and increasingly dangerous.

The story of the “washed-up child actor battling personal demons” is one of the oldest in Hollywood. After becoming a household name following E.T. and Firestarter, Drew Barrymore developed a drinking habit at the age of nine, followed by a cocaine addiction when she was 13. Macaulay Culkin (Home Alone) has allegedly battled heroin addiction for the past four years, while actress Lindsay Lohan (The Parent Trap) has been in and out of rehab—and prison.

One exception to the rule, Mrs. Doubtfire’s Mara Wilson, has openly discussed why so few “child stars make it out of Hollywood alive or sane,” citing the lack of protections and the loopholes in the Coogan Act, a 1939 bill meant to protect child actors from the abuses of stage parents. The star of The Kid, Coogan was one of the richest actors of his generation—with an estimated $4 million in net worth (a sum that comes out to around $50-70 million today) from his successful career.

There was just one problem: His mother and stepfather (who acted as his managers) spent all the money, because it legally belonged to them. “No promises were ever made to give Jackie anything,” his mother told the press. “Every dollar a kid earns before he is 21 belongs to his parents. Jackie will not get a cent of his earnings.” After a lengthy lawsuit against his parents, Coogan only saw $126,000 of his wages.

There was just one problem: His mother and stepfather (who acted as his managers) spent all the money, because it legally belonged to them.

But as Wilson explains, the Coogan Act, which sought to reform those wage abuses, only protects 15 percent of a child’s earnings—meaning that many child actors don’t actually want to be in the industry at all. They’re merely doing it to make a living for their parents. “The next time a former child star is in the news, look at the age at which he or she started performing,” Wilson explained in an editorial for Cracked. “Then imagine making a life-changing decision at that age. Chances are good he or she wasn’t the one who made it.”

However, it’s bigger than just flimsy labor laws that are easily exploitable by greed. A bigger problem is that many child stars can’t escape the system, either because they’re forever recognized due to iconic (or in the case of Lloyd, infamous) roles or due to what Wilson calls the “hedonic treadmill.” The Minneapolis Star-Tribune’s Tee Schaffer describes this phenomenon as “the process of becoming used to nice things you have and no longer deriving much satisfaction from them.” Such problems are exacerbated as child stars age.

A year in a kid’s life seems like an eternity, and they think anything happening now will happen forever. Years of adulation and money and things quickly become normal, and then, just as they get used to it all, they hit puberty—which is a serious job hazard when your job is being cute.

It’s basically a real-life version of Logan’s Run. A child actor who is no longer cute is no longer monetarily viable and is discarded. He or she is then replaced by someone younger and cuter, and fan bases accordingly forget that the previous object of affection ever existed.

Most of you reading this felt pretty disgusting and useless while you were going through puberty. But imagine that people you once relied on and trusted—as well as millions of people you’d never met, who had previously liked you—had told you then, “Yeah, it’s true. You are exactly as ugly and worthless as you feel.”

That process of growing into adulthood is awkward enough already—between hormones, growth spurts, and peach fuzz—without having to do it in public—or on the Internet. The Web is a particularly difficult place to be a child star. In 2010, Perez Hilton caused a public uproar after he tweeted an upskirt photo of a then 17-year-old Miley Cyrus, defending himself against claims of child pornography by saying she was “asking for it.” “She’s been in the business for a long time and she’s aware that there are paparazzi around,” the blogger told Joy Behar. “She should be careful about how she exits a car.”

Since they were young girls, Mary-Kate and Ashley Olsen were widely lusted after on the Internet as the object of ultimate perverted fantasy: underage twins. Thus, the date that they officially became legal was commemorated with its own countdown clock, a now-defunct site that proclaimed: “Gentlemen, start your engines and get out your best booze.” As the San Francisco Chronicle’s Peter Hartlaub put it, “it was a private milestone for two young women, and a disturbing rite of passage for a nation of creepy men.”

Many child actors don’t actually want to be in the industry at all. They’re merely doing it to make a living for their parents.

But as Hartlaub explains, the she’s-legal-now countdown is an old practice, dating back to Shirley Temple and Elizabeth Taylor. The Internet has just made the act into a public spectacle.

While we treat these children’s lives as just another form of entertainment, there are real stakes in the exploitation of child actors. Many parlay early success into lucrative careers as adults (like Leonardo Dicaprio and Jodie Foster), but too many others become unfortunate statistics—finding themselves continuing to pay for choices they never made to begin with. After all, no one wants to deal with the perils of Hollywood, fame, and adolescence just to end up a listicle on BuzzFeed. All you really want is what any child wants—the chance to be a kid.

I have a modest proposal: Instead of casting child actors in movies and TV shows, all children should be played by the CGI baby from American Sniper. It might look ridiculous, but judging from Jake Lloyd’s arrest, it’s a lot better than the alternative.