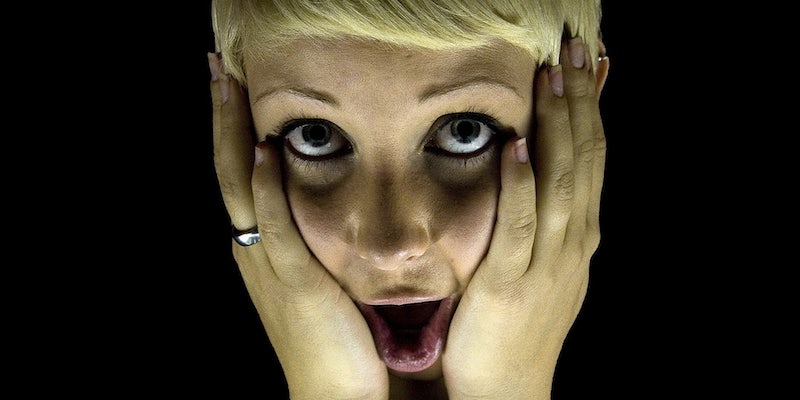 The Internet has made it easier for people all over the world to communicate. It's also made it a lot easier to hold women back.

In the West, we still tend to think that social progress is like river tubing, we just have to hop on board, pop open a brew, and float to Shangri-La. Women’s rights? Check! Civil rights? We passed that ages ago! LGBT equality? Just relax, man! We’ll get there.

The sobering truth is that things don’t get better on their own, no matter what Dan Savage wants you to believe. In fact, if you belong to a member of a marginalized group, you probably are acutely aware that things can get worse. Much worse. If, like me, you’re a woman on the Internet, you’re probably starting to realize just how bad things can get.

Women on YouTube, for example, are opening up about the sort of harassment and abuse they face every day on their channels. from sexist slurs to unwanted sexual advances to threats of murder and rape. At last month’s VidCon, a conference for YouTube creators, women talked about the effects of YouTube harassment on their feelings of personal security and their ability to produce content.

Most worrying of all is the fact that many female content creators leave YouTube after their very first video because of the sorts of comments they receive. These women learn all too quickly that the price they have to pay to be a YouTube personality is a sense of security and emotional wellbeing. If you’re a man, imagine walking into a store only to be greeted by waves of employees throwing dog shit at you. You’d leave, too.

So now that we live in a world where women can’t even speak without being harassed, it’s probably worth asking ourselves where we even got this idea that the world was going to magically become a good place if we just waited long enough? Picture a bunch of wealthy white British dudes writing treatises with feather pens while perched on top of piles of gold and that’s essentially the source of popular attitudes surrounding social change in the West.

Yes, it’s an Enlightenment-era notion, this idea things will just get better on their own. Historians refer to it alternately as the Idea or the Myth of Progress, the belief that technological and social progress are inevitable, and that these two kinds of progress go hand in hand. As long as capitalists and entrepreneurs do their job, reason, truth, and justice will eventually prevail.

But if you want proof that technological progress and social progress don’t go hand in hand, women’s status on the Internet is Exhibit A. Services like YouTube have allowed women to create communities of support and discussion surrounding shared media interests. It’s also allowed women to reclaim ownership over discussions of fashion, beauty, girlhood, and motherhood, on a massive scale.

But the Internet has also made it much easier for men to manipulate, harass, abuse, stalk, and, yes, physically harm women.This past weekend, I was on a panel with some members of Nostalgia Chick, a set of veteran media critics who often include feminist perspectives in their videos. They told me that the Internet, in many ways, has become a less hospitable place for them to do their work over the years.

And I believe it. Between 4Chan, Men’s Rights Activist groups, the Reddit Red Pill community, pick-up artist (PUA) groups, and anti-PUA groups like the one that Elliot Rodger clung to so dearly, the Internet has allowed men to band together more efficiently than ever before to threaten and antagonize women. Every woman with an online presence has a story to share about unwanted contact, sexual harassment, and predatory behavior.

As if this baseline level of sexist filth and grossness on sites like Facebook, YouTube and OkCupid weren’t enough, men can now easily create coordinated harassment campaigns to abuse and threaten female creators. Female game developer Zoë Quinn, for example, faced waves of harassment and abuse simply because she submitted a game to a popular distribution service.

As women, we’re often told that this Internet harassment is “not real,” that it’s “just the Internet,” that we need to expect it and develop “thicker skin.” Women internalize these ideas, too, or at least accept that we can’t turn back the tides of abuse that we have to deal with. Akila Hughes, a YouTube beauty blogger said at VidCon that she was “lucky” to have grown up with the Internet because she’s grown “thick skin” and knows what to expect.

And yet, as women, we know that, no matter how thick our hides might be, the emotional effects and physical dangers of Internet harassment are all too real. We experience real pain as a result of the sexism we face daily but men on the Internet constantly dismiss, trivialize, or joke about the abuse that we face.

Feminist writer Katherine Cross refers to this disavowal of Internet abuse as a Möbius strip: “The Internet is presented to us as a mobius strip of reality and unreality—real when it’s convenient, unreal when it is not.” This allows “inhumane behavior” to seem “inevitable,” and it forces us all to accept it as our natural condition in this world.

But it’s all real. We have to accept that the most popular media sharing site on earth also harbors some of the most vile people. As The Mary Sue reports, citing a scientific study, “trolls on YouTube are more frequent and make more sexist, emotional, and irrelevant comments than on other parts of the Internet.” YouTube is one of the easiest ways for women to talk to one another; it’s also one of the most fertile breeding grounds for abusive male pests.

The harassment that women face online is all too real. The Internet didn’t make men into sexist assholes; they were sexists assholes to begin with. The Internet just provides them with easier and more public ways to display their terribleness at the expense of women’s health and wellbeing. Worse, it creates new places like Red Pill in which men can reinforce and encourage each other’s sexist behavior.

YouTube comments aren’t “just the Internet.” They’re not the product of a group of otherwise nice guys who suddenly become evil when they wear a veil of anonymity. YouTube comments are actually a nightmarish glimpse into the sexist attitudes that define the fabric of our own existence in the “real world,” a world that, like YouTube, is owned and dominated by men. The most terrifying gift that the Internet has given us is that it’s shown us how men honestly perceive the world: as a place where women exist exclusively for their sexual pleasure.

In the wake of VidCon, and as more and more women start speaking up about the harassment they face online, it’s time to start realizing that our narrative of progress is deeply flawed. Things aren’t getting better for women on the Internet; they’re deteriorating and ignoring the problem amounts to being complicit in it.

Enlightenment thinkers believed technological advances could save us all. But John Locke never could have seen 4Chan coming. It’s time for us to shed this dangerous habit of thought and start taking the abuse enabled by new technology seriously.