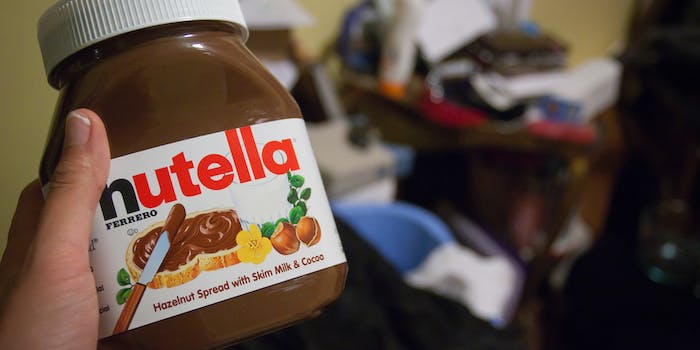 She was named after the Egyptian goddess.

Growing up, I was always pretty frustrated sifting through those racks with personalized keychains and mugs, futilely looking for the name “Gabriel” or “Gabe” printed on one of these souvenirs. But one little girl in Australia is having it much worse, because her name is Isis.

The Sydney Morning Herald reports that the five-year-old’s aunt went to a department store and tried to buy five personalized jars of Nutella with the recipients’ names on them. Isis and her brother Odhinn’s names were rejected, but Odhinn eventually got cleared. The store manager refused to print one with Isis, which is spelled the same as ISIS, the acronym for the jihadist group Islamic State.

“Like all campaigns, there needs to be consistency in the way terms and conditions are applied,” Ferrero said in a statement to the Herald. “Unfortunately, this has meant there have been occasions where a label has not been approved on the basis that it could have been misinterpreted by the broader community or viewed as inappropriate.”

Heather Taylor pointed out to the Herald that her daughter was named after the Egyptian goddess Isis and her son was named after the Nordic god Odin. The Isis mythology has been part of history for centuries; the use of the acronym ISIS for the terrorist group only developed over the past two years.

The mere utterance of “ISIS” strikes a chord for many people, but it’s unfortunate and unfair that a little girl has to deal with people’s irrational fears just because of her name.

The five-year-old’s mother said that she wouldn’t support “Hitler” on a Nutella jar, which makes perfect sense. If you’re naming your kid Hitler, there’s probably something wrong with you.