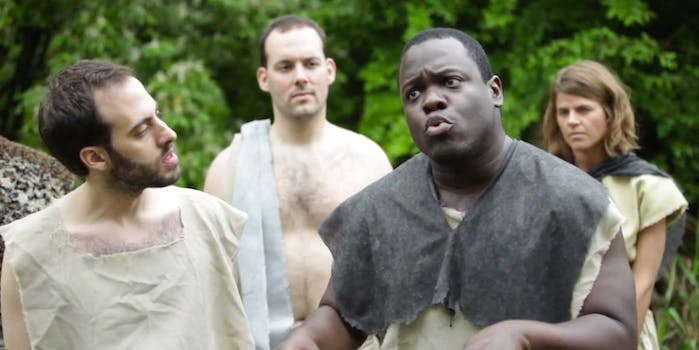 Our ancestors have run into a population problem.

Our ancestors have run into a population problem. There’s not enough people, and the only way for this tribe to fix that is to stop sleeping with the same sex in favor of the opposite gender. Naturally, they’re wary when it comes to change. It’s the birth of heterosexuality.

Matthew Clarke’s 2-year-old daughter doesn’t want to get dressed and go back to bed. Only she’s actually portrayed by a grown man and comes off as menacing. There’s only one way to determine who’s the boss of the house: a tickle fight.

Using the ambient sounds around him—a slammed car door, clapping, a stair rail—Stony creates all the beats he could possibly need on a loop before breaking into Macklemore and Ryan Lewis’s “Can’t Hold Us.”

Do first dates feel the same no matter who you’re with? Chances are you’re probably following a script, and when it comes to getting the check, no matter how much you both scramble for your wallets, there’s only one right answer as to who pays.

5) Gillette, “How Does the Man of Steel Shave?”

Bill Nye takes on one of the more pressing questions that came out of the Man of Steel trailers: how does Superman shave? He only has theories so far, but he believes that either Superman uses a Kryptonian material if the device has to be harder than the beard or his beard could be more brittle than the rest of his body.