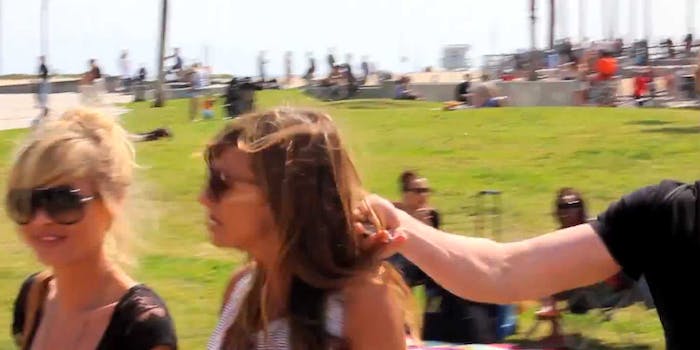 This haircut prank ends even better than expected

Don't mess with the 'do, dude.

You may recall, back at the zenith of a little TV show called Jackass, that a popular ongoing prank among the series regulars was to buzz unsuspecting heads with a hair trimmer, leaving a weird bald patch or two. But who needs the actual barber’s device when you can get an iPhone app that sounds just like it?

The fellows at BorfPranker, a new YouTube channel that will presumably devote itself to these sorts of shenanigans, didn’t come up with the “Prank Trimmer” software themselves, but they did come up with the idea to use it on strangers—which, although personally invasive and probably ill-advised, does make for some pretty good encounters. There’s the woman who instinctively, justifiably slaps the prankster, for one, and another dude who demands $30 for the haircut that was apparently just ruined. (Keep an eye out for the guy wearing a hat, a clear highlight.)

Most victims follow a familiar pattern, however: ducking in fear when they hear the noise and then frantically feeling their hair to get a sense of how much might be missing. Probably the most surprising thing going on in this video, actually, is that people are so relieved to have their hairdos left intact that they laugh off the creepier aspect of being touched by some random bro on the street without warning.

Will stunts like these get you arrested eventually? Yes. And we’ll be more than happy to laugh at that video, too.