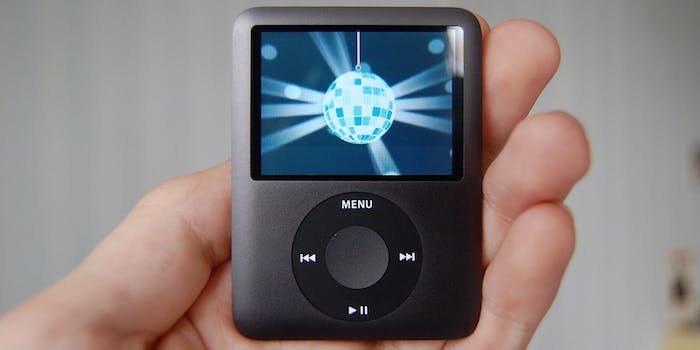 Why the death of the iPod was the end of privacy

On its 14th anniversary, here's how the iPod should be remembered.

In our advanced age of smart devices, it’s worth commemorating a dumb one. Apple’s iPod MP3 player celebrates its 14th anniversary this week. When it debuted in 2001, the device presented sleek design unparalleled in handheld technology—be it a cell phone, camera, or other music players—and its signature white earbuds quickly became a fashion icon. The business model attached to it, better known as iTunes, help save the music industry during a time where artists and labels struggled to respond to the growth of online piracy.

Yet for all the change it fostered within the world of media and technology, the iPod will likely go down in tech history as the precursor to the revolutionary iPhone.

This is a shame not just for reasons of nostalgia. Before the first iPhone could make smartphones part of our personal identity, the iPod was perhaps the last mass market gadget that acted like a product instead of a surveillance device. There weren’t GPS trackers that followed your every move or microphones covertly listening to your conversations. Compared to the gadget in your pocket right now, the iPod was as about as concerned about your actions and habits as a calculator.

The iPod, the classic version of which Apple stopped producing last year, represents a dividing line between an era of privacy and the way we live now. Smartphones have created a surveillance economy of companies that profit off your data, creating new business models for every sector of the economy, even retailers and colleges. This “Leave No Data Behind” approach has stretched to laptops, game consoles, automobiles, and even the appliances in your home.

In 2001, when the iPod was released, relatively few devices could actually be tracked in any meaningful way. In the late 1990s, cellular phones—perhaps better known today as a “dumbphone”—became popular targets for evidence in criminal trials. But narrowing down your location was nothing more than an educated guess based on the position of cell phone towers—and nearly useless in rural areas. Any avid listener of the true crime podcast Serial, which covered a 1999 murder case in its first season, will be familiar with the lack of reliability inherent in the technology.

If you’d like to see how such technology has developed in the years since, turn on your Android device and feel free to be creeped out by Google’s scarily detailed record of everywhere your phone has been based on your GPS location; the iPhone’s “Find My iPhone” feature elicits similar chills. GPS was first made available for commercial use in 1996 but took a decade to become a common feature on such devices. In doing so, it skipped right over the iPod.

This “Leave No Data Behind” approach has stretched to laptops, game consoles, automobiles, and even the appliances in your home.

But your location is not just tracked by phone manufacturers themselves. Companies like Facebook and Yelp find their marketing tools are more valuable the more accurately your phone tracks your location.

As Yasmeen Abutaleb wrote for Reuters in July, advancements in GPS technology have made targeted advertising “much easier, to the extent that a consumer walking past a given retail outlet can receive ads in his or her Facebook or Google app showcasing some particular product available at that store.” Your smartphone is not simply a device you own: It’s a tool for the companies that have made your business their business.

This mentality extends beyond smartphones into most other digital devices—and may soon take over the entire consumer economy. Windows 10, the newest version of the widely popular operating system, has given every desktop and laptop PC the same tracking capabilities of a smartphone. The newest generation of game consoles act much like George Orwell’s telescreen, recording everything their cameras capture.

Even your television itself could be doing so: Samsung found itself in hot water earlier in the year when a new model flat-screen TV warned owners “that if your spoken words include personal or other sensitive information, that information will be among the data captured and transmitted to a third party.”

In the coming years, this philosophy of design will soon take over your car and your home. A report by ABI Research predicts that 60 percent of cars sold in 2017 will have a direct link to the Internet, and Google and Apple are currently in a race to catch up with Tesla in order to sell the first self-driving car. Likewise, the “smart home” of the future may soon become a reality. The “Internet of Things” has brought with smart clothes dryers, smart slow cookers, and smart refrigerators, all reporting your use of them back to their data-driven motherships.

Alexis C. Madrigal and Robinson Meyer wrote in the Atlantic last year that this digitizing of everything accomplishes three questionable goals: “It becomes smart, it becomes hackable, and it’s no longer something you own.” The more access we give companies to our everyday objects, the more control we give up over our information, our use of those products, and the products themselves.

The newest generation of game consoles act much like George Orwell’s telescreen, recording everything their cameras capture.

This is a recent problem. The classic iPod allowed no apps, connected to nothing without a cable, and barely knew enough about your usage habits to track your favorite songs.

On the anniversary of the iPod’s release, it’s worthwhile looking at how much the world has changed since the device debuted in stores. As I hold my own decrepit version of the original iPod today, I remember it feeling magical and futuristic, as if Captain Picard had shown up and offered it to me from some distant planet. But today, it’s legacy is its simplicity—it managed to do everything I needed it to without selling me out by tracking my location. That feeling is likely lost for future generations.

No, I wouldn’t give up my smartphone for a Motorola RAZR, and I wouldn’t ditch Spotify for an elegant white rectangle. But some do, with dumbphone use slowly making a comeback, as people grow nostalgic for the days of disconnection; even options like the Blackphone 2 hope to make the smartphone as secure and encrypted as the days when we didn’t have to opt-in to privacy as a feature; it was just the default.

But these are niche products for small customer bases. The same numbers that once flocked to by iPods are now happy to be tracked and sold, knowing they have nothing to hide. With the iPod, however, that was never a question we needed to ask ourselves because no one was ever looking to see if we did.