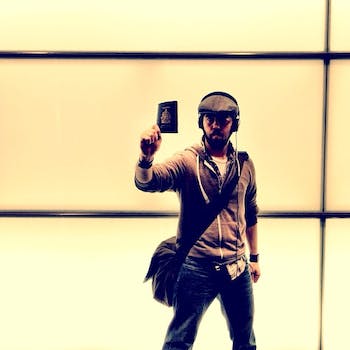 A Canadian man who used his iPad to cross the border into the United States couldn't replicate the deed.

Martin Reisch, mild-mannered Montreal photographer and iPad devotee, shot to fame earlier this month when he crossed the border into the United States with only a scanned version of his passport on his iPad.

For a time it seemed like Steve Jobs’s famed reality distortion field was in effect at that modest Vermont crossing.

The U.S. government huffily denied that Reisch had used the iPad scan, insisting he’d presented his driver’s license and birth certificate. Reisch told the Daily Dot that they were lying or mistaken, as he didn’t even know where his birth certificate was, much less presented it at the crossing.

The question is, would the trick work twice?

Yesterday, Reisch had to face the border once again, this time at the much-more-sensitive Montréal-Trudeau airport,  instead of some backwoods road crossing. (Canadians once infamously responded to an American request to double security at one Manitoba crossing by setting out not one but two red cones when the border guard had gone home.)

True to his law-abiding Canadian nature, he didn’t take any chances this time. Reisch packed his passport and took a picture of  himself and posted it on Instagram  for proof. Clearly, he got across the border the traditional way—with a passport. The magic did not work.

But he will always remember the day he crossed the border using his iPad and driver’s license only, under the approving eye of Steve Jobs’s ghost.

If you see him at the Consumer Electronics Show, rub his iPad for good luck.