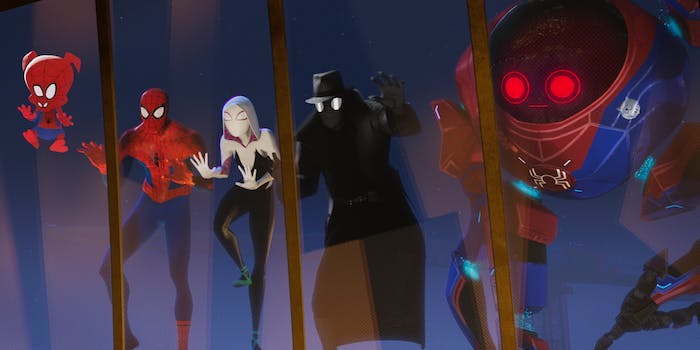 Spider-Man: Into the Spider-Verse/Sony Pictures Animation

It took a lot to make the film into the finished product.

Spider-Man: Into the Spider-Verse is basically a masterpiece, one that’s complete with resonating character moments, stunning animation, and a story that ties it all together. But as one of the film’s writers reveals, it wasn’t anywhere as easy as the end result made it look.

Over the weekend, Phil Lord shared what he called the “storywheel” of the film on Twitter, a whiteboard that includes a list of nearly every plot point. It’s something of an incoherent mess—although Lord notes that it made sense to him and the other filmmakers.

As he put it, about a year before the film’s release, they decided to reshape Into the Spider-Verse, which wasn’t just about writing new scenes. On top of adding new elements to Into the Spider-Verse (including a brand new third act), they also had to fit in pre-existing material, making it sound more like 3D chess than simply shifting around a series of cards with plot points written on them.

Some of Lord’s fellow filmmakers, including co-writer and co-director Rodney Rothman, offered their own views into the near-impossibility of making Into the Spider-Verse into a film that makes sense and relays the story they wanted to tell.

Fortunately for us, their efforts paid off in spades, and the end result worked out when so many things could’ve gone wrong. But it’s clear that even more than a year after the release of Into the Spider-Verse, there is still so much of it—including comforting messages from one of its stars—that can still resonate with its audience. Even, as it turns out, that the filmmakers didn’t get it right on the first go.