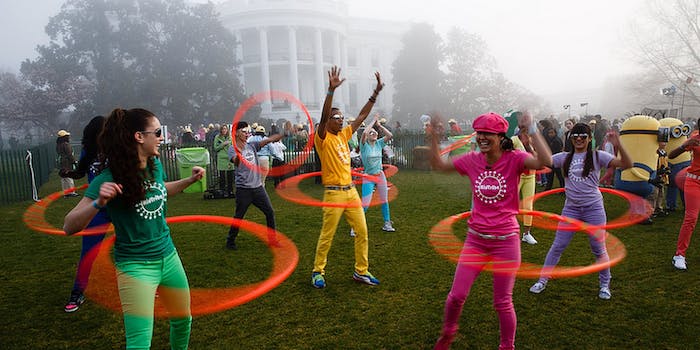 Did the Internet cause the government shutdown?

It is generally accepted today that the United States is more polarized politically than at any time since the civil rights era—and perhaps even the Civil War. Is the Internet responsible?

The polarization is the foundational narrative of the current crisis of government. The extreme wing of the Republican Party has enough clout in Congress to hold the spending bill hostage until the spending they don’t much care for is removed. On the other hand, the president feels no compulsion to compromise on laws that were passed by a duly elected Congress—even if it wasn’t this one.

Matt Lewis, in the Week, argues that the rise of direct democracy, accelerated by the Internet, is behind the polarization. The point of representative democracy, he writes, was to give representatives time to govern. They’d be held accountable by the people, but only at the appointed time, when passions had cooled and when they could be judged on their whole record.

He makes a very valid point.

Athens, the West’s first experiment in democracy, which gave us Plato, Aeschylus, and Euclid, was kind of a disaster.

Unfettered direct democracy led to excesses that no one in their right mind would want to repeat. The mob was often swayed by sophists and charismatic leaders, such as Alcibiades—who betrayed Athens multiple times and ultimately lost the Peloponnesian War. The mob also sentenced Socrates to death for corrupting the minds of the Athenian youth and impiety. And then, of course, there were the paroxysms of mass violence that periodically took over the streets of Athens.

The United States of America’s founding fathers knew this history well and sought to do everything they could think of to avoid the viciousness of mob rule and tyranny of the majority.

And yet, ever since, there has been a trend toward greater and greater direct democracy. The U.S. Senate is now directly elected by the people, rather than by state legislatures, as the Constitution originally had it. Many states allow the people themselves (in theory) to write the laws directly through referenda. The list goes on.

Now, Lewis argues, the Internet takes it all to the next level:

“With Twitter, email, constant polling, and 24-hour cable news, our leaders must forever be at the beck and call of their constituents and pundits, and that’s not as salutary as it sounds. Everyone might not get to vote on everything, but they have a giant megaphone with which to weigh in. And that digital version of direct democracy is undermining our representative democracy.”

But is direct democracy (whether in America or Athens) actually prone to mob rule? And what exactly is it that the Internet makes worse?

Those are the questions that Ezra Klein raised in a tweet responding to Lewis’s column. Lewis’s column itself was a response to a post by Klein, “13 reasons Washington is failing,” in the Washington Post.

Responding to Lewis’s point that the current system was creating a situation of mob rule, Klein tweeted, “My disagreement is that this is unlike direct democracy in that it only engages the highly engaged, which is the highly partisan.”

First off, Klein’s response actually indicates a broader problem with direct democracy. Is it actually prone to mob rule? Or does it empower extremists to hijack government for their own fringe ends?

It is hard to imagine that it was actually a majority of Athenians rioting in the streets, and most referenda are created by special interest groups. They get the petition signed by their membership, and then they write it cleverly so that whatever it is sounds perfectly reasonable to the average voter, who does not have the privilege of an advisory staff or floor debate.

In other words, it can be argued that just as frequently, direct democracy empowers the loud minority more than the mob.

And more importantly, has the Internet made this tendency even worse? By giving over Twitter to every racist or wealth redistributor, have we turned the commons (like Times Square in the ’70s) into someplace nice people never venture? And in so doing, have we turned over our government to the muggers?

I don’t really doubt that we are more polarized than ever, but that polarization started well before the Internet had taken over the public square.

The federal government last shut down in 1995/96, after Newt Gingrich led the new conservatives to power in 1994. The World Wide Web was just a few years old, and still limited to a very few academics and nerds.

One quick look at the Internet, however, and there’s no question that it’s certainly home to many fringe extremists—whether you’re trawling the (remarkably large) less savory corners of Reddit or the Drudge Report.

But then there are sites like F*** You Congress. It’s funny, it’s profane, it’s engaging, and it’s ultimately centrist. It shares quick anecdotes from the shutdown that highlight the sheer mass stupidity and absurdity of it all.

For example: “In a most-delicious dose of irony, no, hypocrisy, no, stupidity caught on camera, Rep. Randy Neugebauer chastised a parks employee for enforcing the shutdown that he himself voted for.”

Then it offers you a button to tweet your congressman.

Its implicit message is pragmatic: Get passed the partisan B.S. and get to governing.

Any Internet observer, even half paying attention, has to admit that both Lewis and Klein reveal something true about the Web. It is prone to mob rule. Just as often, it allows extremists to overrun the public square, and at times like these, it does feel like the inmates are running the asylum.

However, democracy has another feature, which is its saving grace, and that feature is also accelerated by the Internet. Democracy and, even more so, Internet-powered democracy are open systems. They equally empower the common-sense pragmatist and the fair centrist. One such person created a site to express that perspective and made it easy for any other moderates out there to shout just as loud as the fringe radicals.