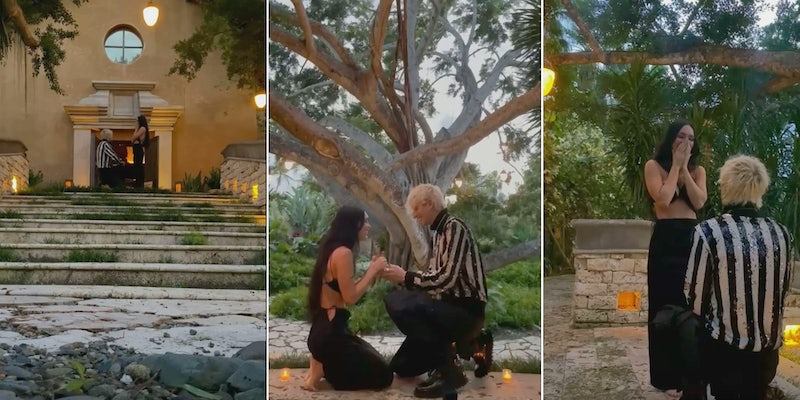 This week on the internet: ‘We drank each other’s blood’

Plus: 'Seinfeld' get a meme remake.

Celebrity couples are doing a lot of posting in 2022

Willingly or unwillingly, you probably learned too much about celebrity couples in the last two years of the pandemic.

Celebrity news no longer revolves around paparazzi shots (although those are still popular). Instead, celebs are creating their own news via social media posts. The line between celebrity and influencer is becoming increasingly blurred, especially after celebrities started joining TikTok. A few celebrities remain blissfully offline, but others are choosing to show off more of their personal lives.

The result? Celebrities posting photos, videos, and announcements that receive a lot of attention. The latest instance arrived on Wednesday night: Megan Fox posted a video of her engagement to singer Machine Gun Kelly, and it currently has more than 20 million views. The Instagram comment section immediately turned into a reaction space with most people focused on the last line in her caption: “We drank each other’s blood.” Whether they actually drank each other’s blood or not doesn’t matter—they got attention for it, just like they did for their “I am weed” meet-cute.

The same evening, actors Jason Momoa and Lisa Bonet announced their divorce in a combined message that Momoa posted on Instagram. “We share this not because we think it’s newsworthy,” they wrote. “But so that as we go about our lives we may do so with dignity and honesty.” Of course, the news became instantly newsworthy.

Friday is your day to relax, recharge, and check in with yourself. After a long, exhausting week, a healthy dose of self-care is just the thing you need to start your weekend off the right way.

So we compiled a list of the best health, wellness, and self-care ideas to help you achieve the perfect end-of-week wind-down. Start the weekend off with a healthier and happier you!

A line from ‘Seinfeld’ gets a meme remake

For a show about nothing, Seinfeld has provided a lot of content. The latest meme takes a scene from a season 8 episode of Seinfeld, “The Chicken Roaster,” in which a Kenny Rogers Roasters opens across from the street from Kramer and Jerry’s apartment. Its bright red sign begins to annoy everyone. When Jerry sees a red light coming from Kramer’s apartment, he asks, “What’s going on in there?”

The red light of the scene lends itself nicely to a deep-fried meme, and other accounts found uses for the line in films like The Thing and shows like Succession.

TikTok influencer Rory Teasley has reportedly died at 28 after being strangled by his boyfriend of 10 years during a fight over a video game.

The New York Post reported that Teasley’s boyfriend, Docquen Jovo Watkins, called the police just before midnight on Jan. 6 to report that the two had gotten into a fight and Teasley was now “sleeping” on a couch. He was pronounced dead after being taken to a hospital.

Known as user @too2pump4tv on TikTok, Teasley described himself as “Everybody Gay Bestfriend” in his bio. He was famous for posting dance and comedy videos and gained a following of about 222,000 on the platform.

Machine Gun Kelly’s outfit while proposing to Megan Fox was immediately meme’d. This was the best one: