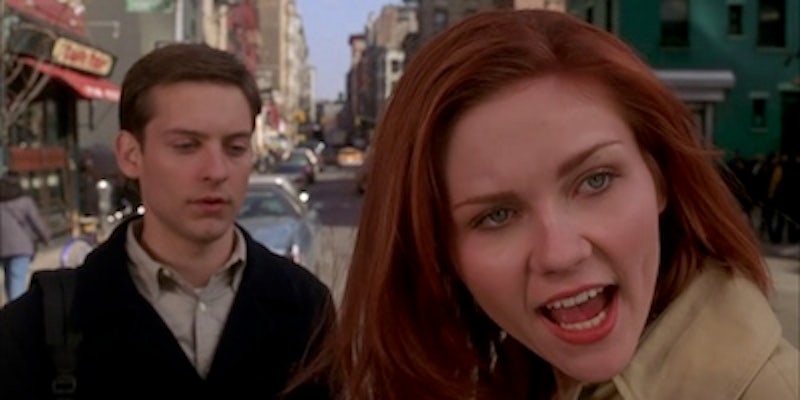 This week on the internet: John Mulaney discourse and ‘Spider-Man’ memes

The ninth Spider-Man film in two decades, Spider-Man: No Way Home, arrives in theaters this December. The trailer for it received a record number of views and sparked plenty of discussion about who will make an appearance.

But the people of the internet have been focused lately on a scene from the first modern film to feature the superhero: 2002’s Spider-Man starring Tobey Maguire and Kirsten Dunst. In the scene, which has turned into a meme, Dunst’s MJ is speaking to her restaurant boss who’s off-camera while Maguire’s Peter Parker/Spider-Man looks defeated in the background. “Yes, Enrique! OK? I get you,” she says before turning back to Peter.

Without the context of the clip, the screenshot of the scene makes it look like MJ is fiercely defending Peter. From who? That’s where people on the internet got creative, imagining what MJ was saying. “He’s not white he’s ITALIAN,” captions one meme. Once the meme began to spread, people began Photoshopping either MJ or Peter to reference a character from pop culture. “He SAID what’s your favorite scary movie!” reads one meme in which Peter is wearing the mask from the Scream movies. Another meme references a Ciara song.

Why is a meme from a 2002 movie going viral now—especially when Maguire hasn’t played the web-slinging hero in years? The correct answer is that the Sam Raimi-directed Spider-Man is a classic. The film arrived at a time before every comic book film was carefully dissected on social media. But, as people discovered it on streaming services years later, it has found a new audience online. “Tell Me The Truth I’m Ready To Hear It,” another meme from Spider-Man that involves MJ, also became popular in 2021.

No matter how many times Spider-Man is rebooted, people still keep coming back to the original.

Upsie is the smarter alternative to AppleCare

AppleCare is great, but it doesn’t offer users flexibility. From its limited window of time to sign up for service to charging users a deductible for every repair, AppleCare has a lot of strings. That’s why we adore Upsie, the flexible, independent smartphone insurance plan.

Last week, the internet once again became unmoored regarding comedian John Mulaney. A recent photo of Olivia Munn, who he is dating, quickly led to pregnancy rumors—which Mulaney confirmed on Tuesday night on Late Night With Seth Meyers. Then the Mulaney discourse reached peak levels of unhinged.

“I got into this relationship that’s been really beautiful with someone incredible,” Mulaney told Meyers, adding that Munn “held his hand” through his recovery after going to rehab in late 2020. “And we’re having a baby.”

We reached out to a few Mulaney Twitter stan accounts for some insight on why fans reacted so strongly to the news. One, @michthemood, says that the recent news is “a lot to hear, but it’s his personal choices and it’s his life, which we cannot do anything about.”

“I think people have developed a parasocial relationship with him because he is such a comfort human being for a lot of people, including myself,” adds @chaoticmulaney.

The original Blue’s Clues—the Nick Jr. preschool program that made us feel like we were part of a mystery-solving team—turns 25 this year, and its original host has a touching message that’s making some of the show’s original viewers emotional.

From 1996 until 2002, Steve Burns played Steve, the human who worked alongside the animated blue dog (fittingly named Blue) to solve a number of mysteries in and around his house. A new video featuring Steve in his iconic green-striped shirt is a nostalgic gut punch even before he starts speaking.

“Look at all you have done and all you have accomplished in all that time,” Steve said. “I guess I just wanted to say that after all these years I never forgot you… ever. And I’m super glad we’re still friends.”

This roach that was apparently painted into a wall inspired endless meme edits.