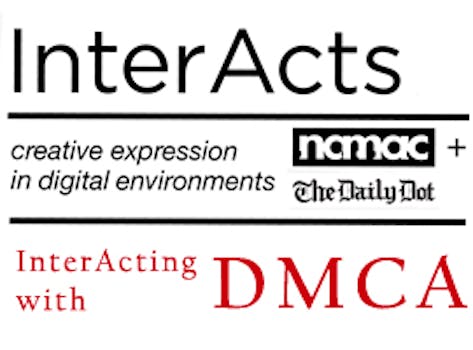 InterActs tackles the problems with DMCA

The Daily Dot is pleased to present InterActs, a series of roundtable discussions exploring digital creation, in partnership with the National Alliance for Media Arts and Culture (NAMAC). InterActs brings together various members of online media to examine topics related to creating art and community in the age of the Internet.

If you’ve ever gotten a takedown notice on your YouTube account, had your DVD player or other software tell you that the movie you’re trying to watch is rights-restricted, or been the victim of a false copyright claim, then you know how confusing and frustrating the concerns regarding the Digital Millennium Copyright Act (DMCA) can be.

Originally the DMCA was passed to provide major corporations with a method of recourse for quickly acting upon copyright infringement, as well as to deflect responsibility from Internet service providers that host infringing material. However, confusion over current copyright law, as well as occasional digital rights mismanagement or abuse of claims from copyright holders, has hampered the activities of many media creators and consumers.

As new technologies evolve, creative forms of expression abound, and as both artists and corporations become savvier about sharing and protecting content, copyright becomes an increasingly contested territory, despite the fact that more and more forms of creative work are protected under the Fair Use clause of U.S. copyright law. While media arts nonprofits, advocacy groups, and legal teams have been fighting to extend the rights granted to creators under the DMCA, rights holders are increasingly threatening and misfiring at protected material.

This week, the Daily Dot and the National Alliance for Media Arts and Culture will look at the DMCA and current copyright law as it pertains to digital rights: the confusing, the frustrating, and the hopeful. Moderated by David Cooper Moore, the discussion will feature creators, fans, educators, and tech and legal experts who have felt the full impact of DMCA on their work. We’ll discuss the victories and challenges in Fair Use across media arts disciplines and fill you in on how to join the community that is staunchly and successfully advocating for protected forms of creation in an increasingly restrictive world.

How to interact with us:

Use the Twitter hashtags #InterActs #DMCA, or direct questions to us at @InterActsOnline. Submit comments on Google Plus or on YouTube.

After the conversation, the Daily Dot and NAMAC will post summaries of the broadcast and/or embed the videos on their respective websites. Will also follow up with a compilation of resources and links discussed during the conversation or that panelists find helpful to these issues.