Here's the reference guide you'll wish you had in middle school.

Here at the dawn of the 21st century, it can often seem as though there are no good synonyms for “penis,” let alone the rest of the male genitalia, left to deploy. As is customary in matters of anatomical verbiage, the Internet has come to the rescue.

Feast your eyes upon “The PENIS,” an ingenious use of the Web-based timeline software Timeglider, based upon Green’s Dictionary of Slang, by Jonathon Green. While the site’s samples include “A History of Idaho” as well as accounts of the CIA’s Valerie Plame leak case and the Wright brothers’ road to the invention of the airplane, “The PENIS” endeavors simply to tell you who called the male junk what—and when.

Our tour begins in the 1360s, when the eternal “ballocks” first came into usage. This sufficed until roughly a century later, when “jewels,” “eggs,” and “ballock-stones” began to convey, in broad vernacular, the idea of testicles. The timeline comes with a legend, from this point on quite useful, showing which terms denote a full set of genitalia vs. a foreskin or penis itself (which is broken down into the categories “The Penis,” “Large Penis,” and “Small Penis”).

Not until the 16th century did we start to call them “balls,” though we were also calling them “giblets” back then. The high point of that era would have to be the coinage of “pudding prick” to mean the male member generally. Following this came an explosion in terms not matched until the 20th century. Some of the best include “ladyware,” “maypole,” “bagpipe,” “picklock,” “pissing-place” and “plum-tree-shaker.” Some of these, obviously, are more literal than others. 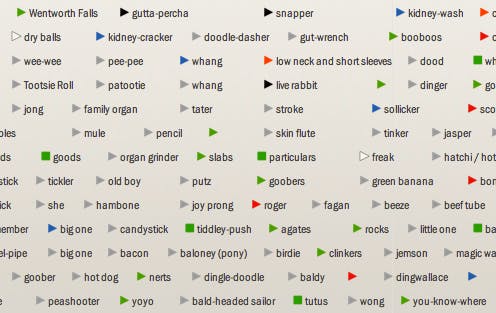 In the 1920s, common slang caught up with the tradition of circumcision, giving us the odd “blind meat” and more easily understood “low neck and short sleeves.” Apparently in the 1970s this look was called “kosher dill,” and the Jewish influence remains to this day with euphemisms like “Hebrew National.” We have no earthly idea where “zebbled” comes from, though it certainly sounds Yiddish.

Callous references to impotent penises, meanwhile, have abounded for hundreds of years. The comparatively recent “porridge bird” is a weirdly evocative example, as is “doodle-flap,” while the 1830s may have every other era beat with “stuffed eel-skin.” A couple of decades later, to “die in a furrow” was the idiom of choice.

Still struggling to find the very best word for some part or variety of male apparatus? Luckily, the timeline’s legend allows you to narrow the scope of what you’re looking for. If you want to know how people in the 1990s referred to boners, let’s say, just click on the “Erect Penis” icon and boom: “pink steel” and “Bacchus marsh.”

Did anyone really say these things? Does it matter? Throw out that dusty old thesaurus; this is the only reference manual you need. The only thing missing is the penis-lingo of the near future—and that’s where you come in.