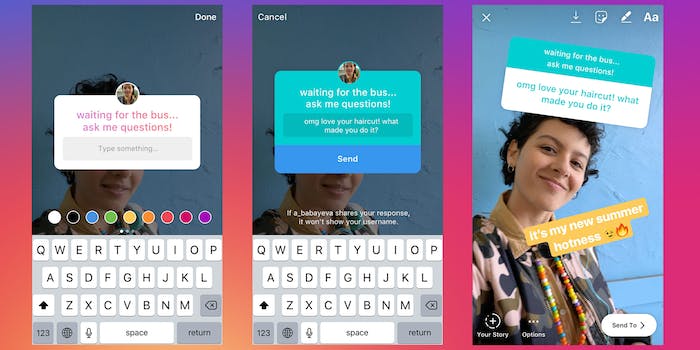 Last week, Instagram added a new feature that allows people to attach a Questions sticker to Instagram Stories. The default text for the sticker says “ask me a question,” but you can edit it to say anything you want. Many users chose to write some variation of “AMA,” or ask me anything, prompting a flood of responses from their followers. If you’re active on any social network, you should know that no activity is completely anonymous—especially on Instagram. The app includes a feed of what posts your friends liked, and it essentially shows you who views your Stories in order of who you like the most. But when Instagram unveiled the Questions sticker, many people mistakingly thought that their responses would be anonymous.

It led to people asking their friends a lot of awkward questions—just look at these tweets.

How did so many people think this feature is anonymous? We can probably blame the design of the sticker. When someone posts a Questions sticker on an Instagram story, you see a personalized prompt to ask that person a question (unless they edited the text to say something else), and a “type something” field to write your question. But when you “type something,” that response is sent to the person who posted the sticker. And it’s definitely not anonymous. While the responses are not shared publicly, the person who posted the sticker will receive them in their regular notifications tab. There, it shows the avatar and username of the person who responded to your sticker, along with their response. It doesn’t look much different from a notification when someone posts a comment on a photo.

Instagram, to its credit, did not say that responses would not be anonymous in the announcement. The example images of the feature show users’ avatars and names included with the responses to the sticker. But this part sounds a tad confusing: “Though you’re able to see who submitted each response in your viewers list where it’s private, when you share that response in your story, your friend’s photo and username will not be shown.” In other words, if you choose to share your friends’ responses in Stories, their identifying information won’t be shown. But, privately, you will know who said what.

This isn’t the first time people thought a feature on Instagram was anonymous. Instagram’s Poll sticker for Stories has the same deal—you ask followers to choose between two answers to a question and you can see who picked which answer. Some people thought the answers were anonymous. People should have guessed that the Questions sticker would be similar.

I should’ve learned my lesson when I found out instagram polls weren’t anonymous & I was picking rude options, but nope I just had to go and type some rude shit into the questions thinking it was anonymous again

At least on the Poll sticker, you pick an answer that your friend already wrote, so there’s no chance of embarrassing yourself too much. But the revelation that the Questions feature is not anonymous should be a final warning to all Instagram users. Nothing you do on Instagram Stories is anonymous.