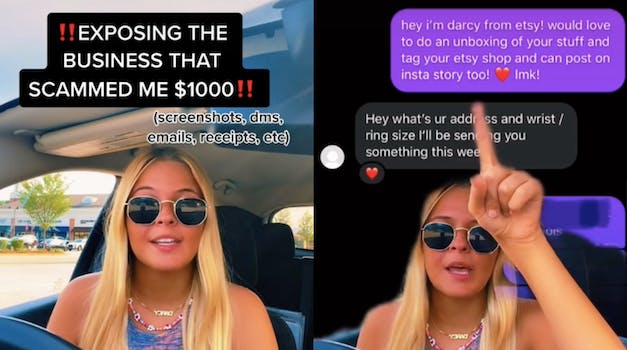 The brand deleted its social media accounts and took its website down.

An influencer exposed a brand that allegedly owes her close to $1,000 in a viral TikTok. Darcy McQueeny, who has amassed a following of over 559,000 followers, previously agreed to do sponsored posts for the brand Poosh Accessories.

After posting about the brand and promoting a discount code they made for her, she said the brand received hundreds of orders because of her. In the TikTok video where she reveals the name of the brand and explains the story, she throws in that she didn’t sign a contract.

The company that McQueeny worked with, Poosh Accessories, is a small jewelry company. In the video, which currently has over 323,000 views, the influencer shared screenshots of conversations she had with the brand through Instagram DMs dating back to December 2020. They sent her free products which she later posted about on TikTok.

McQueeny said the collaboration was going well and they were keeping in touch about the amount of money she earned from commission via her affiliate code. When the total got to about $800, they told her that she would need to wait until she hit $1,000 before they pay her out—which is different from when they allegedly told her she would be paid at the end of each month.

This is when she tells her followers that she didn’t have a contract. “It was one of my first collabs, I just started TikTok, I was very small at this point and I had no idea,” she said in the video.

Less than a week ago, she posted a video about being scammed by a company and had not yet named them. She said they agreed to pay her or “come to an agreement” within three to five business days, but after two weeks, they still had not paid.

After working with the brand for four months, she asked the brand if she could be paid out before the $1,000 goal and that’s when they ghosted her. She showed screenshots of her constantly following up and not getting any response.

Then, she received a message from someone who was reportedly “new management” and wasn’t aware of this deal. Therefore, they refused to pay McQueeny for the content. After this, the company’s new Instagram account and website have both since been disabled.