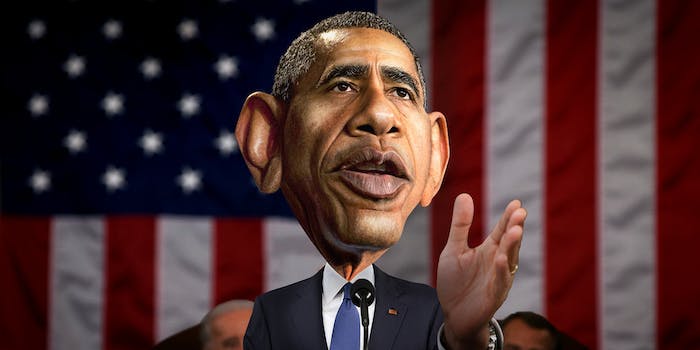 Behold the power of the executive order.

As Arkansas contemplates a “religious freedom bill” akin to the controversial measure recently passed in Indiana, one may very well wonder: What, if anything, can President Obama do about this? More specifically, can he use his power to issue executive orders—one that has already been utilized to historic effect throughout his presidency—to halt a movement of targeted discrimination against LGBT Americans? While #BoycottIndiana is working to mobilize an effort against the bill from a grassroots angle, it may be time for Obama to act.

Normally it bugs me when CNN stays on the same story all day. This week I'm not too bothered. #BoycottIndiana

Throughout his presidency, Barack Obama has utilized executive orders to make historic policy changes on matters ranging from immigration reform to fighting global warming. To understand what he can and can’t do in the case of Indiana and Arkansas, it is first important to recognize that there are three types of executive orders which he is capable of issuing.

First, there are National Security Directives. Earlier today, for example, the White House’s website introduced a new executive order that “authorizes the Secretary of the Treasury, in consultation with the Attorney General and Secretary of State, to impose sanctions on those individuals and entities” responsible for or complicit in cyberattacks against the United States and/or its citizens. Inspired by last year’s Sony hacking, these measures are a direct reflection of the executive branch’s constitutional prerogative on matters pertaining to national security. While this obviously doesn’t apply to the religious freedom bills, they’re worth mentioning as one of the categories of executive order at a president’s disposal.

More relevant here are proclamations, a special type of executive order that is generally ceremonial in nature. Last February, for instance, President Obama issued a proclamation declaring March 2015 to be Women’s History Month. Although this didn’t cause any major shifts in gender policy, it clearly demonstrated the president’s sympathy with feminist causes and provided women’s rights activists with a potential rallying point. Similarly, an executive proclamation celebrating gay rights or criticizing the states that wish to legalize homophobic discrimination might at the very least offer encouragement to LGBT activists.

Finally, there are executive orders that use that branch’s direct control of federal agencies and officials to issue directives about the execution of pre-existing laws or policies. This particular power has a long history of being used to advance the agenda of civil rights (see: Harry Truman’s integration of the Armed Forces, Dwight Eisenhower’s desegregation of southern public schools, and Lyndon Johnson’s ban on racial discrimination in federal housing, hiring, and contracting). On each occasion, the president circumvented congressional blocs that were hostile to the cause of human liberty and used his power to guarantee civil rights for an oppressed minority group.

Although only the president and his advisers can authoritatively speak to how the president might use an equivalent executive order to oppose these anti-gay measures today, it stands to reason that it lies within his power to act decisively. The main question is whether or not it would be appropriate for him to use this power.

To explain why this shouldn’t be done, let’s use process of elimination to rule out all of the potentially valid cases against the president taking such action.

The strongest argument to be made against the use of an executive order at this time is the fact that these bills have yet to work their way through the judicial branch. It may turn out that, just as circuit courts and the Supreme Court have advanced the cause of LGBT rights with rulings on various marriage equality bills, so too could they come to the rescue in stopping the religious freedom bills.

After all, the civil rights legislation passed in the 1960s clearly prohibits discrimination based on race, gender, and religious background. It would not be difficult for a rational jurist to conclude that sexual orientation should be folded into this original set of categories. Indeed, there is precedent for them doing so: Americans with disabilities are now protected by the civil rights measures, even though this wasn’t the case when they were initially passed.

The problem with this suggestion, though, is that the American judicial system is hardly known for its efficiency or speed. Months or even years might pass before a federal court actually looks at the Indiana and Arkansas laws. In the interim, countless LGBT Americans could continue to be turned away from businesses based on the simple fact of their identity.

Another possible solution has been ruled out by the unfortunate political realities of our time. In the past, a president who wished to fight a new form of discrimination might turn to Congress for assistance—just look at Lyndon Johnson and civil rights or George H. W. Bush with the Americans With Disabilities Act. But the current Congress is unlikely to team up with Obama on gay rights—or anything else. From the moment he took office, GOP leaders made it clear that they would not work with him out of deference to the hyper-partisanship (some would argue racism) of their base. This would make Obama’s task difficult enough under any circumstances, but it becomes even more so when you consider that the Republican Party has been at the forefront of the anti-gay rights movement from the get-go.

When all is said and done, the bottom line is that President Obama cannot in good conscience allow Indiana and Arkansas’ religious freedom bills to stand. At the very least, he has a moral responsibility to put his office on official record as being unalterably opposed to these measures, not only by speaking out against them but by exercising his powers to the fullest in working to repeal them.

Beyond that, however, he needs to reestablish the supremacy of the national government on all civil rights issues. This is not, as many of the bills’ supporters would have you believe, a question of states’ rights or protecting the individual liberties of specific religious groups. Since the days of the Emancipation Proclamation, our presidents have understood that their obligation to minorities who might be oppressed by power-mad majorities. If Obama fails the gay community at this time, he will be setting a precedent that will empower other discriminatory bullies in the future.

In closing, it is perhaps appropriate to return to an infamous anti-gay rights quote from the 2004 elections:

The politician who uttered those words was the Democratic Senate candidate in Illinois, a fresh-faced young state legislator named Barack Obama. Over time, he evolved enough in his views to become the first sitting president to openly support gay marriage. That was undeniably admirable of him, but as the reactionary backlash captured by the religious freedom bills shows us, it wasn’t enough. Now it behooves him once more to place himself on the right side of history.