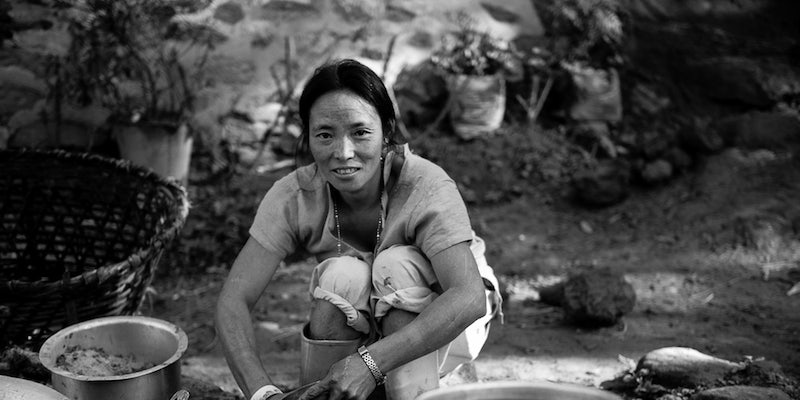 It'll take more than a hashtag to debunk these myths.

Even as President Obama pushes through measures to create legal paths to citizenship, anti-immigrant attitudes continue to persist in America, as 113 Republicans are behind a lawsuit to block Obama’s November 2014 executive order on immigration.

Nowhere are these lingering prejudices more obvious than in the pervasive myths that still dominate American culture. Despite the fact that most of said beliefs are untrue and, far too many cling to them. That matters when it comes to accepting immigrants socially, protecting them under the law, and defending them when they become targets of abuse.

As the hashtag #NoOneIsIllegal reminds us of the humanity of immigrants and undocumented workers, it’s time to combat these dangerous stereotypes once and for all.

1) Immigrants are taking our jobs

This immigration rhetoric is extremely common—and incredibly incorrect. According to a report published last week by Gihoon Hong and John McLaren of the National Bureau of Economic Research, every new immigrant to the United States generates 1.2 new jobs. Of those positions, most actually go to native workers—not the migrants conservatives claim are squeezing American workers out of the U.S. economy.

There’s another reason this myth is incredibly false: As the National Journal reports, “immigrants don’t… compete directly with U.S.-born citizens for jobs.” Instead, immigrants often perform dangerous low-wage jobs other workers simply don’t want. According to Pamela Constable of the Washington Post “immigrants today dominate the labor market in almost every job that entails a high level of danger, discomfort, repetition or extreme temperatures.”

In 2010, Stephen Colbert testified to this as part of a challenge in which immigrant rights organizations invited critics of immigration to trade shifts with a farmworker for a day. Colbert reported that the experience was “really, really hard.”

Lastly, if you’re unemployed and blaming immigrants for your plight, that’s hardly the case. Constable further explains “that less than 3 percent of those who are unemployed said they had worked as dishwashers or house cleaners or in similar jobs in the past five years.” Instead, try blaming practices like outsourcing or the increasing automaton of the American workforce. Immigrants aren’t taking your jobs, but the robots just might.

In addition to creating jobs, immigrants generate nearly $10 billion annually through their labor and income, according to American Immigration Council. Furthermore, the organization points out: “70 percent of immigrants arrive in prime working age. That means we haven’t spent a penny on their education, yet they are transplanted into our workforce and will contribute $500 billion toward our social security system over the next 20 years.”

Moreover, immigrants make tax contributions just like other Americans. In fact, they may pay as much as $140 billion, and that includes undocumented immigrants. They also pay into Social Security, just like other taxpayers. The misuse of public benefits, another commonly cited drain on the economy, is also untrue, as immigrants pay far more into the system than they ever use. Undocumented immigrants can’t access these services at all, even get tax refunds, and non-citizens must have at least five years of established residency before they can apply for benefits.

In this case, immigrants are actually getting the short end of the stick, paying into programs they don’t or can’t use.

3) Most immigrants are undocumented

This is one of the biggest and most pervasive myths about immigration: the idea that the nation is overrun with “illegals.” It’s also one of the most incorrect and the most damaging—such rhetoric reinforces other immigration myths and justifies violence against immigrants.

In fact, 75 percent of immigrants in the U.S. are in the country with full documentation, utilizing a variety of types of visas relevant to their situations. Before pointing fingers at the 25 percent, it’s worth noting that most are people who have overstayed temporary visas—just like the tourist visas Americans receive when they travel overseas.

This attitude feeds hateful beliefs about the “Other,” playing off the common American belief that these “criminals” don’t deserve full legal and civil rights. For immigrants, this has real consequences, as it can be difficult to report crimes or worker abuse—or have your claims taken seriously—in a country so hostile to your very existence.

In fact, 75 percent of immigrants speak English within 10 years. As for those who don’t, it’s not entirely fair to blame them: Competition for adult ESL classes is extremely competitive, and there aren’t nearly enough classes to accommodate requests for seats.

In fact, tensions around the desire to blend in are common themes in immigrant narratives, from the novels of Jhumpa Lahiri to TV’s Fresh Off the Boat and Cristela. While some feel deeply invested in the American melting pot, other question if it’s nothing but a myth (as younger immigrants who want to celebrate their backgrounds argue that wanting to assimilate may be a bad thing). And after the shooting of Freddie Gray in May, the Baltimore Sun’s Charles Campbell declared that the pot “full and boiling over.”

However, this debate wouldn’t be happening if immigrants weren’t blending in with white American culture, continuing to challenge our idea of what America is in 2015.

This myth is partly true and partly false: People making this claim are correct in the sense that it is different because there are actually fewer immigrants than there were at the turn of the 20th century. Notably, immigration standards are also much tougher today than they were historically. The famous open door policy of the 1900s has been replaced by extremely restrictive and hostile rules, as the the Southern Poverty Law Center claims.

As CNN reports, 4.4 million people are currently waiting in line to become American citizens. “[D]epending on the type of visa sought and the country of origin, the wait can be years to decades long,” the news outlet explains. “In some countries, such as the Philippines and Mexico, people have been waiting over 20 years for approval of a family-sponsored visa.”

On the other hand, not much has changed since the early 20th century arrivals to the United States: Modern day immigrants are often forced into overcrowded communities, while being underpaid and exploited. As some of the most vulnerable members of society, they become targets for employment violations, like being paid below minimum wage or getting harassed on the job. It doesn’t stop there—immigrants are more frequent targets of sexual assault, physical violence, and racial profiling by law enforcement.

That’s a serious social problem, and one that shouldn’t be taken lightly.

Immigrants are actually less likely than other citizens to commit crimes and their communities have much lower crime rates. However, racism in the American justice system means that immigrants can become targets for law enforcement agencies, putting a disproportionate amount in jail—which further feeds into the erroneous idea that immigration and crime are synonymous.

Thus, instead of further attacking and targeting immigrants, critics should strive to protect them from further violence.

Undocumented immigration has actually increased since the United States began cracking down on immigration with a growing border patrol, militarized installations along the border, and aggressive anti-immigrant policies. These measures have done nothing to prevent immigration on the part of people seeking refuge and better opportunities in the United States.

One direct consequence of America’s “tightened” immigration restrictions has been a radical uptick in extremely dangerous human trafficking. Immigrants are sexually assaulted and abused in remote desert regions as they try to cross into the U.S. Some die in the crossing, while others brave dangerous methods of transport into the country, like crowding into trucks for human smuggling. Because crossing the border is so difficult, people are afraid to leave—and those on visas may let them expire because they fear they won’t be able to get back into the country.

Backing immigrants into a corner by creating unsafe conditions for them doesn’t reduce immigration. It just makes it highly unsafe, creating risks that no human being should have to endure.

The fact that Americans continue to tolerate dangerous attitudes about immigration is troubling, and it’s time to start pushing back.