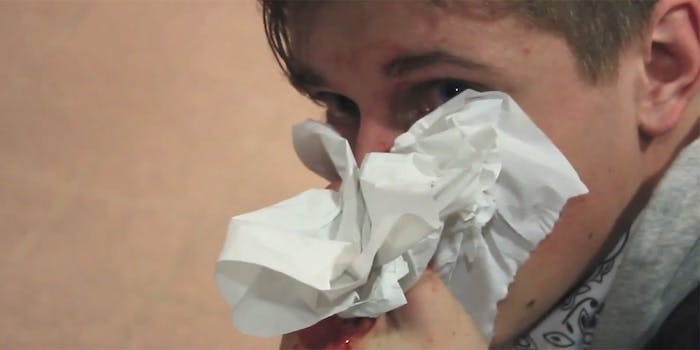 Some rhetorical questions for you: Is it a “prank” when you tie a bandanna over your face, sneak up behind your bro at an ATM in a crowded area, and grab him around the waist while screaming for his money? How about if another friend films you doing it? Or is it not truly a prank until you’re yelling “It’s a prank!” to avoid being further throttled or beaten by strangers?

However you slice it, there was nothing funny about this hidden-camera conceit from Reckless Youth—until it came to a bloody, tearful halt because the particular moron seeking viral Web fame got decked in the face, and hard. Far more surprising than this inevitable outcome is that his accomplice stuck around to make sure he didn’t have a concussion.

Yes, as an experiment designed to test the reactions of bystanders in a violent crisis, this went even better than planned. Nice to know good samaritans are there when you need them.