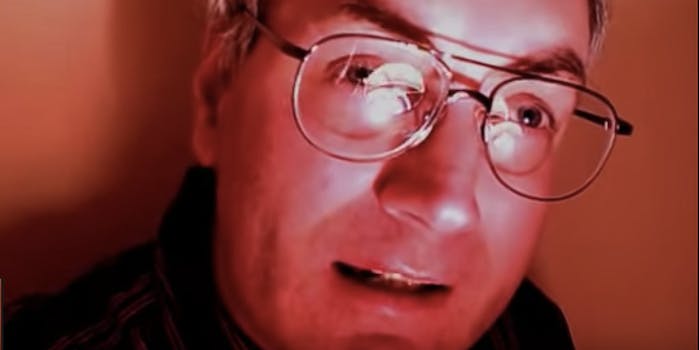 If a man offers to show you how to make iced tea, that would seem pretty harmless, wouldn’t it? Well, not the way this infamous YouTuber makes it.

That, friends, is Steve Sutton. In case you don’t already know him as “The Iced Tea Guy,” allow us to introduce you to a man who has spent the last decade of his life quietly video blogging mundane moments, from close-ups of his salisbury steak dinners to secondhand descriptions of owl attacks.

Sutton recently celebrated a major milestone: his 10-year anniversary as a vlogger. Looking back on Sutton’s body of work, one wonders what drives him to continue with such vigor. It’s certainly not video views, as his average post gets 5,000 views or fewer (although his Child’s Play remake video did go a little bit viral in 2010). He tried his hand at several webseries that same year, but none of them stuck the way videos of himself do.

One can’t help but feel as if Sutton knows that he’s pure Internet potential. People draw fan art of him. He has his own Zazzle store (“Steve’s Emporium”), featuring pillows emblazoned with his face. His website looks like a relic from 1989, and he does voiceovers for videos as weird as his own. When commenters called him creepy, he went meta on them by making this video (for which, unfortunately, he has disabled embedding).

Weird Internet folk are not in short supply, but people like Sutton are the real deal. Unlike many other personalities out there who seek to strike a perfectly odd chord to gain viral attention, Sutton is just plainly odd, in a genuine, straightforward way. It’s exactly what makes him so interesting.

Although Sutton marked his 10-year vlogging anniversary this year, his YouTube account is much younger. His first video there, The Portal: Episode 1, was posted on January 1, 2010. It’s the first of 11 parts in a webseries about a man who discovers a portal to a world of clones and finds himself trapped there. By the way, all the characters are played by Sutton.

Sutton is also a prolific writer, and has penned eight ebooks since 2013, including The Post-Apocalypse Dating Guide, which is exactly what it sounds like. Four of these books are part of the Commander Neat series, which is about a young boy named Billy Blast who craves revenge against the aliens who ate his baby sister.

Besides his consistent media output, information about Sutton online is scarce. Sean Rose, the blogger behind What is This Shit?, mentioned encountering a man he believed to be Sutton on a South Park message board called Total South Park (TSP), and his shock at learning Sutton’s age.

“The self-proclaimed 33-year-old here was user ‘Steve Sutton,’ a TSP regular and the only user to use his full name as his handle,” Rose wrote. “He’d always seemed a little more ‘adult’ than the rest of us (mostly because he used periods and capital letters), but the fact that he was about two decades older than most of us there was a shock. He was also unusually dedicated to the board; after everybody else had stopped posting there, Steve would still turn up once in a while to post a ‘Is anybody still here?’ thread (oftentimes I would be the only one to respond, sadly enough).”

The Sutton account on TSP claims he is a 50-year-old man who joined in 2000. Since then, he’s made 1,637 posts, last visiting in March 2015. He also started a podcast dedicated to the show called The South Park Parkcast. Somehow, Sutton finds the time to fill message boards to the brim, create original animation projects, film his daily life, and keep coming up with future ideas for more. His quiet brand endures, but also no one knows who he is (outside of being “the iced tea guy”). How can someone so potent not be shared all over the Internet, every day, all day?

The Daily Dot reached out to Sutton via Twitter and was granted an interview, but not before he dropped a bit of typical mystery into the mix. 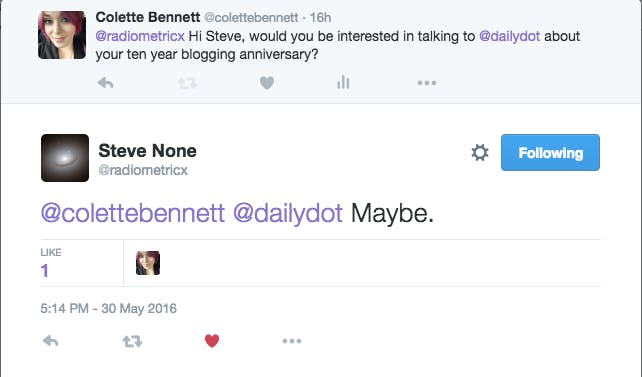 Sutton told the Daily Dot that he posted his first video on April 12, 2006 (from an account he has since disabled), but actually joined YouTube in late 2005.

“Posting videos is just a hobby,” Sutton said. “Sometimes, I just need to stop for a while, but I always come back to it. I used to enjoy it more than I do now. After doing it for such a long time, coming up with things to make videos about becomes harder and harder. It gets a bit tedious, but other times it’s easy. It just takes energy that’s a bit hard to come by these days.”

As for the South Park forum story, Sutton said that he is a fan but doesn’t recall being active on Total South Park. However, he confirmed that he was an active member of another South Park forum called Go Timmy Go, which was eventually shut down. Despite having been a fan of the show for many years, Sutton seems to feel that the latest season is going in a direction that’s very different—and one he isn’t sure he likes.

“It had a politically-correct theme, which they apparently intend to continue next season,” he says. “That’s not really what South Park is about.”

Sutton may have a reputation as a creepy Internet guy, but in conversation, he seems kind and accommodating—not exactly the weirdo he’s made out to be in some of his videos. In fact, his tongue seems to be neatly tucked in cheek. A lot of that persona, he said, is about having fun, and he doesn’t mind being called creepy because of it.

True. But despite the fact that Sutton could likely milk his persona for all it’s worth in a world where Internet stars are king, he said that fame is the last thing he wants. Even the topic of the iced tea video ruffled him a bit, as he wants to be appreciated for other things he creates. “I wish I’d never made it,” he said. “I’m just tired of hearing tea, tea, tea all the time.”

Digging beneath the avalanche of videos and content, what emerges is a person who would like to be noticed, but not too much. One gets a sense of a human doing the same thing we all are—quietly plugging away at life, exploring its limits, searching for a foothold.

When I asked if Sutton thought of himself as an Internet persona, despite his hundreds of videos, the label didn’t fit the bill.