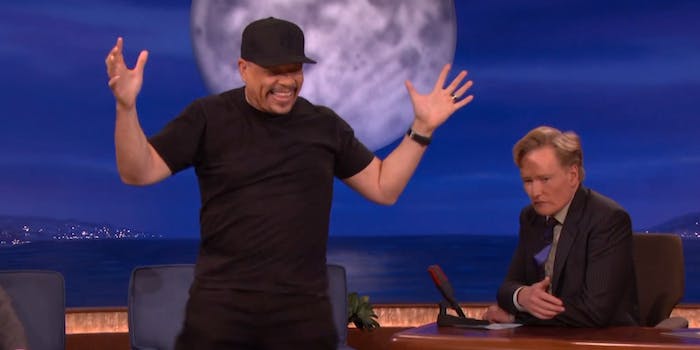 Andy Richter suggests Ice tie a bell to it.

Conan O’Brien knew what he was walking into. Interviewing rapper/actor/tried-and-true original gangster Ice-T on Monday night, the late night talk show host lobbed question after question about T’s interest in video games, focusing on the ever-popular Call of Duty, and how he likes to play the game.

Ice went through a few details concerning his enthusiasm for the game, referencing, at one point, the way his fervor for certain levels seems to freak his wife Coco’s friends out. But Conan kept pressing, eventually prodding Ice by saying, “You must go insane when you beat a level that’s tough to beat.”

Funny you mention it, Conan. Ice does go insane. In fact, he does this little dance he calls the “Dick Dance.” Anybody who used to watch “Ice Loves Coco” knows about it: “When you finally win, you’re so excited. I would stand up in my house, unzip my pants, and do the Dick Dance.”

And then he does the Dick Dance, which you can see at 1:30 here.

Andy Richter suggests Ice tie a bell to it.