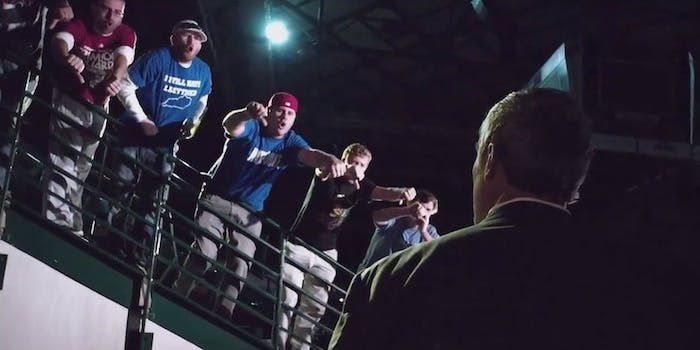 With a documentary called 'I Hate Christian Laettner,' set to premiere, the former hoops star explained his disdain for social media.

While promoting his upcoming 30 for 30 documentary on ESPN, Christian Laettner—one of the greatest college basketball players in history who went on to a solid 13-year NBA career—brought his son to the set of SportsCenter on Wednesday for a TV interview.

That’s the story Laettner told reporters on a conference call later in the day, and when added to the recent Curt Schilling brouhaha on Twitter when a number of users made vulgar comments about Schilling’s daughter, Laettner wants social media reform.

“Let’s do some repercussions right now,”  Laettner declared, and though it was unclear if he was serious with that particular comment, the kind of guff he receives on Twitter is no joke.

Oh, and the name of that documentary, which can be seen on ESPN on Sunday at 9pm ET? It’s called I Hate Christian Laettner.

Laettner told us the douchebag Twitter story on that conference call, and though I couldn’t find that particular tweet, here’s what popped up when I searched for “Christian Laettner” and “douchebag.” And just for fun, here’s “Christian Laettner” and “douche.” In his film, director Rory Karpf gave an impressive variety of reasons why Laettner was hated—not only by the opponents that he and his Duke University teammates beat with regularity (and their fans), but also his teammates.

“Everybody hated Christian,” former Duke teammate Grant Hill said in the film. “Yeah, we hated him too.”

A couple of reasons why:

1) The stomp on the abdomen of Kentucky player Aminu Timberlake during the 1992 NCAA tournament.

2) And then IN THE VERY SAME GAME, he hit one of the most famous shots in basketball history.

Hey, Laettner understands why people don’t like him, but the experience of feeling that backlash on social media is a little unsettling.

“I don’t understand the social media and the social networking things now,” Laettner said. “I don’t really like it. It feels foreign, and I don’t have the time and energy for it. I’d rather be outside working or outside in the wilderness or hunting or fishing or snowboarding. I don’t like all this technical jargon and how smart you have to be with all the technical stuff. It’s pretty uncomfortable for me. I don’t really know what I’m doing.”

The only time I’ve ever been in the same room with Laettner was when I covered an Atlanta Hawks-Washington Wizards game in 2002, and as a few reporters waited to interview Michael Jordan in the postgame locker room, I remember a surly-looking Laettner, resplendently dressed in a fashionable suit, walking with purpose on his way out of the locker room. To me, his demeanor said, “Do not talk to me, reporters. I’m not interested.”

Of course, that’s me simply projecting on him, but I’m sure it was based solely on his reputation for being a jerk. During the conference call Wednesday, Laettner, more than two decades after The Stomp and The Shot and his two national championships for hated Duke, was funny and fairly charming. And maybe he’s not as clueless about social media as he thinks.

Asked Laettner rhetorically, “Do you think Twitter would have blown up when I hit The Shot?”

Screengrab via I Hate Christian Laettner/ESPN