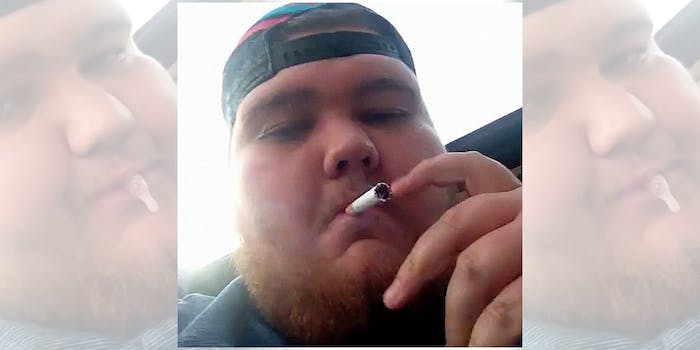 Middletown, New Jersey rapper Young King Dave—a.k.a. David Nixon, “fat boy, chin glistening”—has produced the surprise hit of the summer, but it’s not one of his rap tracks. It’s a short video where he says, “It’s fuckin’ nice out! Who’s down to chill and smoke some loud, feel me? I got loud.”

Young King Dave‘s voice is fairly deep, especially when he raps, but the version of “I Got Loud” that’s going viral right now is auto-tuned to make him sound high-pitched and squeaky. It is hilarious. As soon as the first line comes out of his mouth, it is impossible not to laugh.

And once it had gone that far, remixing this guy’s offer of weed was a no-brainer:

i had to do it pic.twitter.com/akI8o7x2hB

i had to do it pic.twitter.com/akI8o7x2hB

The meme has been pushed by Twitter-famous personalities like comedian Brandon Wardell (of “Dicks Out for Harambe”) fame and Will Menaker of leftist podcast Chapo Trap House.

It also plays well with other memes, like the infamous “shower time, Diesel jeans” Vine:

And the meme about the dog trapped in a car:

there is something wrong with my brain pic.twitter.com/IvXjmjy7F5

And even Family Guy:

Once you’ve heard the video, you just can’t get Young King Dave out of your head. This is destined to be a meme that people will spontaneously remember and laugh at years later.

Her- I bet he's thinking of other women.

Him- its fuckin nice out. Whose tryna chill n smoke some loud you feel me? I got loud. Hit my line pic.twitter.com/kMJgA7gk6c

So you're a Young King Dave fan? Name three of his songs.

Young King Dave auto tuned is the best thing I've ever seen. A week later I'm still thinking about it.

It seems Young King Dave is aware of the meme—he’s even selling t-shirts—but he doesn’t see why it’s so funny. Or, as he told a friend, he “doesn’t know why y’all like that shit.”

At one point, he had only thousands of followers on Instagram, but his account has blown up since the video went viral.