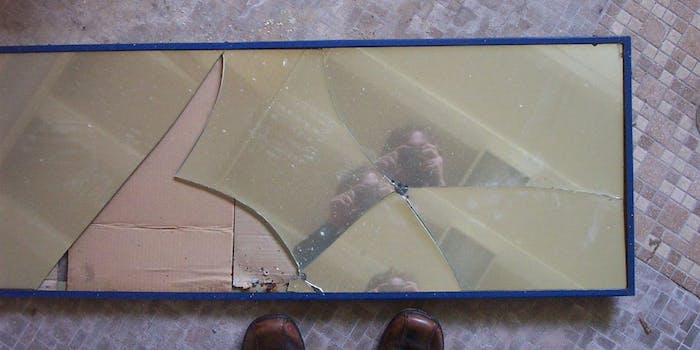 I’m a feminist. I care about women’s rights. I despise non-consensual objectification, and all the bullshit we have to put up with when it comes to how we look. In our society, our beauty defines our worth to an extent, and it pisses me off.

But I’m human, too. As a new member to Reddit, I came across a subreddit that caught my attention: the “Rate Me” page. Scrolling through the endless pages of selfies and glamour shots, I just couldn’t shake the feeling that my own self-confidence needed to be justified.

I guess I have a penchant for masochism.

Sometimes we do things that don’t make sense: Straighten our hair when it’s raining, post more than one selfie in a row on Instagram, date guys that we know aren’t good for us. Looking back on my life, I’ve been known to do some pretty cringeworthy things (my freshman year of college, I tried to friend request nearly everyone in my class as a way of making new friends) just to expand my horizons and see how things fare. For my own curiosity, ego, and self-conscious, I wanted to settle the matter once and for all: Was I attractive?

The results were harrowing.

Ever since I was little, I’ve struggled with who I was. I have a distinct memory of being in 5th grade walking through the cafeteria with my tray of spaghetti and meatballs, and for the first time, noticing that my thighs were larger than every other girl’s. Similar visions have haunted my existence since then. I was the girl who cried in a Hollister dressing room after realizing that no pair of jeans would ever go past her thick, Latina thighs. And that no pair of knee-high boots would ever zip up over my large calves.

I would spend days locked in my room ugly-crying and wondering why my hair was wavy instead of straight, why my arms never fit right in long sleeves, how some girls could wear short dresses without the back being four inches higher than the front.

Now that I’m older, my attitude has veered more toward self-acceptance and even celebration. Where I once saw big thighs, I now see pin-up-worthy curves. Where I once saw fat calves, I now see strength. It helps to see women who look like me in the media, too. (Thank you Jennifer Lopez and Nicki Minaj for never being ashamed of your curves.)

Needless to say, though, the dark thoughts still creep up on me once in a while, particularly when I stupidly put myself in precarious situations of vulnerability such as this one.

Within minutes of publishing my “Rate Me” post—complete with seven photos from my OkCupid profile—the scores came pouring in. At first, most of them were super uplifting. It was nice to hear that people thought I was attractive and pretty, even if the happiness it gave me was rather fleeting. I was getting scores that totally matched up with how I felt about myself, and I was happy to know that I was not unreasonably self-confident.

That same night, I went out to a bar with some friends. Between laughter and sips of beer, I would casually check up on my Reddit post for updated scores. I watched as the ratings quickly dipped from 7s and 8s to “just alright,” “fat and average,” and “a solid 3.” It hit me like a train; all the negativity piled on, and it seemed to be an obvious explanation for all of the reasons I had failed in life, especially in love. I felt queasy attempting to digest that reality.

I tried my best to respond gracefully to every comment, typing out a quick “Thanks!” or even a silly, optimistic-sounding retort as opposed to completely losing my cool. I knew before I started that not everyone was going to think I was the cat’s meow, and I had tried to mentally prepare myself for a few negative comments.

But despite my best efforts, by the end of the night, I was barely focused on my friends as I felt a tight knot forming in my stomach. My stomach sank with every downvote, and the happiness I felt in the beginning of the day felt distant and unmerited.

I looked at pictures of myself over and over again, effortlessly rediscovering my problematic eyebrows, fat legs, and average face. Who did I think I was anyway? I suddenly became that sad girl ugly-crying in Hollister again. As I quickly said goodbye to my friends, I tried my best to wipe away stray tears so as to avoid the embarrassment of explaining why I was so disheartened.

I ended up taking the photos down, refusing to willingly undergo any more harsh scrutiny. I wondered if the rest of the world—passing strangers, family, friends—was silently judging me as cruelly as the people who saw my post.

Since then, I’ve tried reflecting on why the words of strangers stung me so sharply. What I realized was this: Being a sensitive person who tries to think of other’s feelings in every situation, the thought of deliberately going out of one’s way to bring someone else down felt exceptionally cruel. It hurt.

Yet I realized what was worse than being insulted was that I felt I needed the approval of others to legitimize my own happiness. It’s completely ridiculous and unhealthy to live your life on eggshells like that, constantly wondering what the next person will think of you.

Before I asked for others’ opinions, I was happy with how I looked. I expected almost everyone to agree with me. Even though some of them didn’t, it still didn’t change who I was, and within a few days I started feeling like myself again. My fat ass isn’t going away any time soon, so the world might as well get used to it. And I never want to care what anyone else thinks of it again.