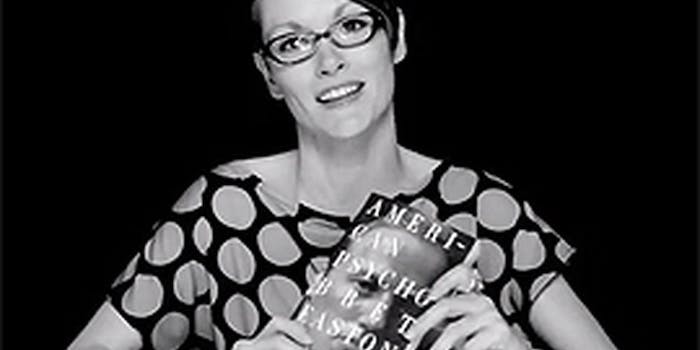 Hysterical Literature, Clayton Cubitt’s mesmerizing video project, pairs female sexuality with good reading in ways that challenge and redefine “literary erotica.”  But the latest installment, the fourth in the series, comes with a killer twist.

Just when you thought the series, which features black-and-white footage of women reading aloud from various books while being steadily brought to orgasm, couldn’t get any more fascinating, Cubitt pairs elite burlesque performer Stormy Leather with literary cult favorite American Psycho. Bret Easton Ellis’s novel is a note-perfect satire of ’80s American yuppiedom whose title character takes to cutthroat business as easily as he does to actual throat-cutting.

Stormy has chosen one such tirade for her passage of the day, a missive about Whitney Houston’s meteoric rise to fame which takes on a new poignancy when taken out of context. You can read the whole excerpt here, but listening to Stormy’s rendition, it’s difficult to think of a better way to experience the rhythm and nuance of Ellis’ language.

This is perhaps the first time in the series where the words the participants read segue so quickly and effortlessly into the realm of the erotic—a fact which might offer insight into why this video is also the shortest of the bunch. Read by a performer who’s very clearly turned on, lines like “Whitney sings longingly against a jazz-disco background” immediately gain sensual overtones.

This transformation is where much of the genius of Cubitt’s project lies. From the opening installment, in which famed alt-porn star Stoya read a tastefully racy, yet eloquent excerpt from Supervert’s Necrophilia Variations, Hysterical Literature has challenged preconceived notions about the mechanics of arousal and what constitutes “erotica.”

In our recent interview with Cubitt about the series, he said his subjects have full control over which book they read: “I instruct them to pick something personally meaningful, and something long enough to read from.”  “Long enough” in this instance is not quite four minutes, a record for the series so far and a testament to how perfectly even incongruous reading material can set readers aflame.

“There is a bit of that religious, almost chant-like recitation pace to the readings,” Cubitt told us, “as the subject battles her body for control. But more specifically, the [series] title is a winking nod to the Victorian treatments for ‘Hysteria,’ which often involved vibrating patients or aiming jets of water at their unruly private parts until they took the cure.”

Perhaps the best example in the series thus far of this battle for control comes when Stormy finally succumbs to whatever is happening just off-camera while reading about Houston’s song “How Will I Know,” lapsing into notes of joy that bear a marvelous resemblance to the kind of unrestrained singing she’s just been describing.

“It’s hard to take in the album on its first listening,” says Stormy, gasping a little on the final words, “but you won’t want to. You’ll want to savor it over many.”

We can’t think of a better way to describe Hysterical Literature itself.