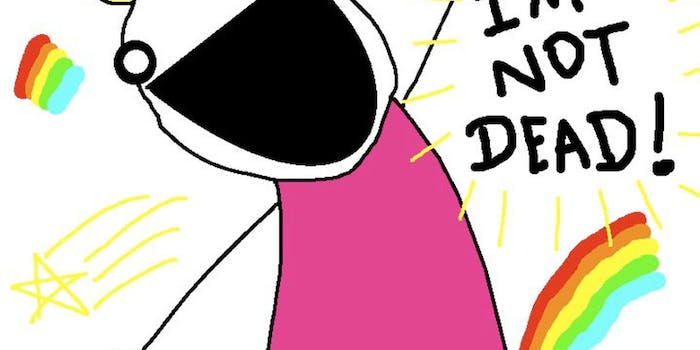 Hyperbole and a Half cartoonist resurfaces

Cartoonist Allie Brosh took to Reddit to update fans on her struggle with depression.

You wouldn’t think that the author of a popular Web comic would have anything to be depressed about. But Allie Brosh of Hyperbole and a Half is proof that the disease can strike anyone.

Five months after her last comic about battling depression, the cartoonist has resurfaced on Reddit to update fans on her condition:

“As you know, I’ve been struggling with depression. … I made a small breakthrough at the time of my last post, but even though I was feeling a bit better, I was still depressed and I knew I probably wasn’t out of the woods yet.”

Last May, Brosh became paralyzed by depression and stopped updating her comic, which PC World listed as one of the funniest sites on the Web in 2011. Her audience, which is somewhere between “three and seven million unique visitors a month,” began to wonder what was wrong.

At last, the 25-year-old artist updated fans on her struggle in October in order to explain her absence over the past six months. Brosh’s haphazard MS Paint illustration style took on a serious tone as she outlined the details of her disease.

Her confession was roundly praised as “brilliant” by sites like Boing Boing, but Brosh’s return was only temporary. As she shared on Reddit, she has since sought help from professionals to treat her severe depression.

“I have since sought the help of several such individuals, and they unanimously agreed that I am horribly, horribly depressed and should absolutely not keep being that way. To that end, I have started taking an antidepressant and talking about my feelings a lot,” she wrote using her Reddit moniker, Tubemonster.

Brosh said she was relieved that her comic’s lack of updates hadn’t caused her fans to “hate” her yet. On the contrary, redditors were very supportive, suggesting remedies that had helped them when they were depressed and invited Brosh to visit r/depression, a Reddit community devoted to the subject.

Fans invited Brosh to do a live interview on Reddit, and the cartoonist said she’d consider it when she was feeling less shy. For now, Brosh said, she felt most comfortable keeping a low profile.

“I think it’s because when I feel weird about myself, my automatic defense mechanism is to go into sloth-mode and pretend I don’t exist,” she wrote, illustrating “sloth mode” with one of her trademark scribbles.

The silver lining: Brosh wrote that she is feeling well enough to work on her highly anticipated book, though progress is still slow.

As much as we look forward to her undoubtedly hilarious print debut, Brosh’s first concern should be getting better. We hope she continues to focus on treating her illness.