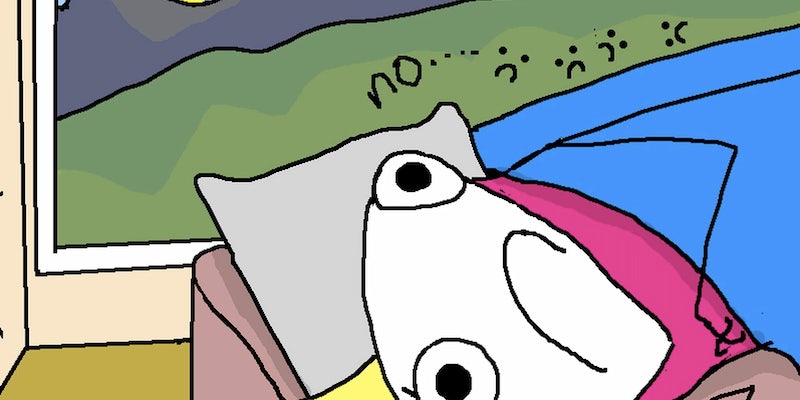 Adventures in Depression not so fun for Hyperbole and a Half

The popular comic returns with a comic explaining why she was on haitus.

One day, Allie Brosh woke up feeling inconsolable. The creator of Hyperbole and a Half, a viral semi-biographical comic, had no reason to feel so sad. But for a long time, she wasn’t sure how to snap out of it.

Brosh details her personal struggle with depression in a new post: Adventures in Depression. It is her first in over six months.

Brosh’s comic, which receives between three and seven million unique visitors a month, is usually known for its humor. But despite her typically silly MS Paint scribbles, the topic at hand is serious.

The 25-year-old, who writes and draws her comic professionally, describes her depressive episode in heartbreaking detail, from melancholy, to frustration, to anger, to the turning point — standing in the video rental store, realizing she didn’t care anymore. And that made her fearless.

She then rented six horror movies, bought  wads of Skittles, and pronounced herself cured.

“And that’s how my depression got so horrible that it actually broke through to the other side and became a sort of fear-proof exoskeleton,” she concluded.

This absurdity is the trademark of Brosh’s work. Previous comics have generated at least two popular image macros, X all the Y and the Alot, both scribbled in her signature crude artwork.

But through the veil of humor, Brosh has occasionally displayed fragility. GigaOm wrote about a time she created a lengthy lip-dub video to respond to a troll calling her ugly.

This time, the sounds trolls are being muffled by an overwhelming welcome back by the social Internet.

“That is EXACTLY what my depression was like!” wrote @amanda_hocking. Like Brosh, Hocking is a young woman who first found fame online.

“A concise guide to anyone who wants to understand depression,” wrote @SoulMasterKaze.

Touchstone is planning to release a book inspired by her comics in Fall 2012, which may mean some of her best work is yet to come.