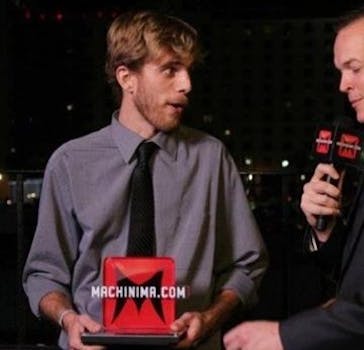 Hutch was one of the YouTube gaming community's loudest voices—until he suddenly quit. Now, he opens up about why he left.

Shaun Hutchinson, aka “Hutch,” has been called one of the “Founding Fathers of the Call of Duty YouTube scene,” for his video game commentary.

Then in April, he quit suddenly with no explanation to his fans. The community was devastated.

“Hutch you were my second but most favorite youtuber I ever﻿ saw and I feel as though I havent gotten any closure on your leaving” wrote rileyisamazin on Hutch’s last vlog, uploaded December 2011.  “It’s like you’re hiding something.”

As it turned out, Hutch was hiding something. In a Reddit AMA published Wednesday, he finally revealed that the YouTube life made him miserable.

To his fans, there was seemingly no reason for Hutch to be unhappy. The YouTube professional was making six figures a year to remark on video games. To date, videos on Hutch’s personal channel have been viewed more than 71 million times.

However, Hutch explained in the Q&A thread that he quit Machinima and YouTube because he realized the YouTube commentating scene “was not the sort of life I wanted for myself, and that I didn’t like the effect the experience was having on me.”

In fact, working full-time on video-game videos was making him depressed.

“Most, if not all of my depression has cleared since removing myself from an environment that overwhelmed me,” wrote Hutch on why he left the YouTube scene.  “I feel much, much better these days,” he said, before adding the entertainment industry isn’t for everyone, himself included.

He added that he found being in the public eye “taxing,” saying he “had a hard time ignoring the negativity” and took things “personally.”

Now that he is free from making videos constantly, Hutch says his “life is simple again.” He is working on finishing his degree, and would one day like to work in the “public service sector.”

“Good to know that you’re happy, wish you all the best,” wrote redditor Lukeh15.