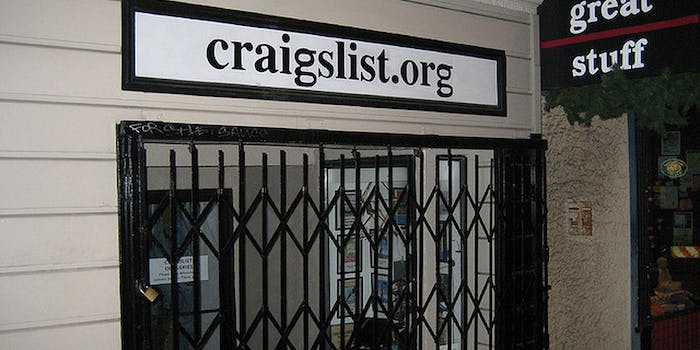 Like a hurricane: The best of Craigslist’s casual encounter posts

Looking for a partner for the storm or just some fun reading? Try Craigslist.

Just because Hurricane Sandy effectively shut down New York City, that hasn’t stopped its citizens from trying to find someone to be shut in with.

In fact, several New Yorkers are so bored with Netflix and whatever other indoor activities they had lined up to help them pass the time during the storm that they’ve taken to classified listings website Craigslist to find someone to rock like a hurricane. Unsurprisingly, an overwhelming majority of the listings were written by men, both gay and straight.

Below is just a sampling of some of the most amusing ads.

“Obviously I can’t go to work and mostly everything is closed today,” one bored Williamsburg resident wrote.  “Anyone want to hookup today for some sensual pleasure. All I ask that you host. I will take care of the rest.”

“I’ll be your hurricane boyfriend til [sic] the storm is over! I have miles and miles of duct tape! But we could just watch netflix and cuddle, too!” typed 39-year-old Jim.

For some, this was a chance to channel their inner Kim Kardashian.

“I want to make a sex tape,” wrote an unidentified man. “You come over in a short dress and heels, wrap your thighs around my head, and journey to euphoria.”

If you’re going to take this Lothario up on his offer, however, you better be clean and be able to go the distance.

“Have decent stamina, cause [I] like to go throughout the day, night[,] and repeat.”

It’s not just single men, either. A “cute couple” who’s been together for more than six years is taking what’s been one of the bigger storms to hit the East Coast as an opportunity “to try something new.”

New Yorkers, even if you’re not looking to hookup with some random stranger, your local Craigslist personal listings is yet another great way to pass the time until life goes back to normal.