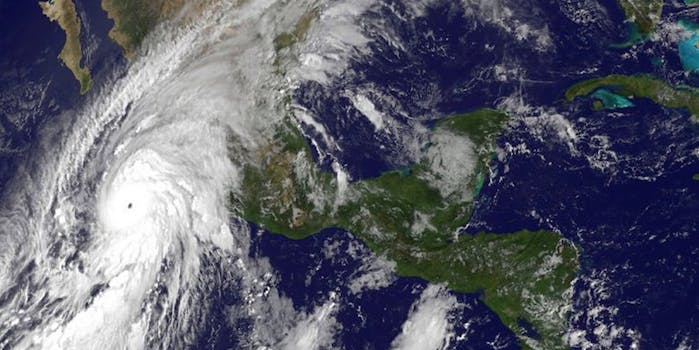 It is the strongest hurricane ever recorded.

Hurricane Patricia—feared one of the most savage Category 5 storms in recorded Western history—made landfall late Friday across Mexico’s Pacific Coast. According to MSNBC the fishing town of Perula, Mexico, and its population of roughly 661, was hit hardest and could be “unrecognizable” by Saturday.

It could have been a lot worse.

Winds that recorded at 200 mph tapered off to 165 mph when the storm struck Mexico at about 7:15pm ET, according to the U.S. National Hurricane Center. It is projected to disintegrate as it moves across the country’s mountainous coastal region, and is expected to cause heavy flooding.

Earlier in the day the tourist city of Puerto Vallarta, Mexico, was in Patricia’s cross-hairs, but the storm hit east—the aforementioned Perula is 92 miles south. Patricia landed 55 miles west-northwest of Manzanillo, Mexico, according to CNN.

#PrayForMexico They are getting hit by the biggest hurricane ever! pic.twitter.com/jSLHtIi9wN

As the storm broke east, many travelers fleeing Puerto Vallarta—15,000 tourists were evacuated according to CNN—ran into heavy rain and wind along the highway. In this clip from Friday, a truck is seen toppling over.

According to the National Weather Service, Patricia is expected to adversely affect the Mexican states of Jalisco, Colima, Michoacan, and Guerrero “continuing into Saturday.” Beyond the storm, flash floods and “life-threatening” mud slides are expected.