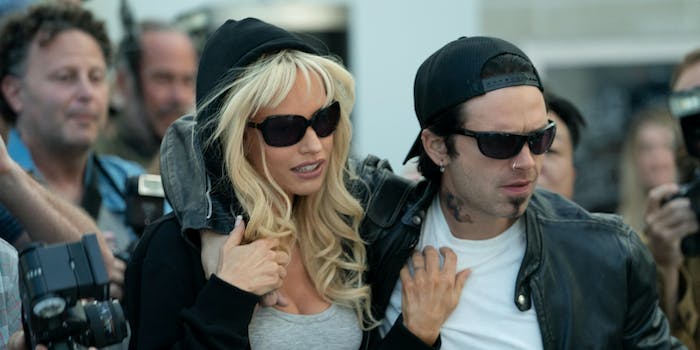 The last shot of Pam & Tommy is one of the more perplexing final TV shots in recent memory, and an odd bookend for a show about a criminal act that reshaped celebrity culture.

Pam & Tommy, the Hulu limited series about Pamela Anderson and Tommy Lee’s chaotic relationship and the theft of their honeymoon sex tape, tries to position itself first as a comedy, and later as something else. Lily James as Anderson and Sebastian Stan as Lee save it from being a total tonal disaster.

The eight-episode series, based on a 2014 Rolling Stone article by Amanda Chicago Lewis, begins in 1995 with Rogen’s character, carpenter Rand Gauthier, stealing a safe belonging to Lee as revenge for the Mötley Crüe drummer firing him without pay. Rogen, along with creative partner Evan Goldberg, produced the series; the first few episodes, directed by I, Tonya’s Craig Gillespie, set up the meet-cute and the burglary, packed with fuzzy needle-drops. There’s an extended scene where an aroused Lee talks to his own penis (voiced by Jason Mantzoukas) and it is a bit surreal that this is a Disney property that features Winter Soldier talking to his animatronic dick.

Eventually, Pam & Tommy addresses the consequences of the tape’s theft and dissemination, for Anderson specifically. Lake Bell, Gwyneth Horder-Payton, and Hannah Fidell helm the remaining episodes and you can certainly tell when that shift in perspective happens. Fidell’s episode in particular captures how Anderson was singled out and shamed not just for the tape but her career.

The series illuminates the formative sleaze of early internet commerce; we encounter an array of morally compromised businessmen, including notorious Seattle pornographer Seth Warshavsky (The White Lotus‘ Fred Hechinger), who put the tape online. An earlier scene of the couple going to a public library to view their stolen sex tape is framed with the appropriate balance of humor and horror. But that balance doesn’t apply to the series as a whole.

The two leads are excellent. James absolutely inhabits the role of Anderson—thanks in large part to some amazing effects and makeup—and is able to strip her down to her most humane and meditative. Anderson had no involvement with the show, and reportedly said that its existence is “painful.” Its stars and creators—that includes showrunner and writer Robert Siegel—seem to want to give her some retroactive justice, but without her involvement or consent, that feels empty.

As Lee, Stan aptly captures a man raging against the changing of tides. Actually, he’s almost too good as Lee, who started his 2005 memoir Tommyland by talking to his own dick. Unfortunately, Lee’s 1998 arrest for spousal abuse is swept into some on-screen text at the end of the final episode, and his violent behavior is given a much more palatable presentation.

Throughout all this is Rogen as Gauthier, the real electrician who stole the tape. While Gauthier inadvertently helped create an early internet business model, he’s not a public figure like its titular stars. Rogen tries to give him some backstory and a moral arc, but ultimately he just feels like another Seth Rogen character.

Pam & Tommy’s two leads have big followings, who will tune in despite the controversy. And there’s early Emmy buzz. If there’s any justice here, it’s likely going to be from the discourse around the show.