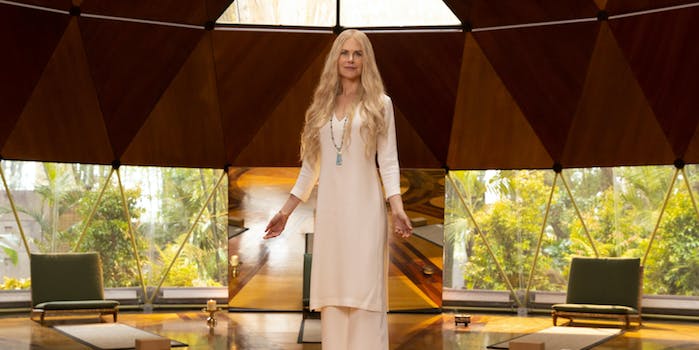 ‘Nine Perfect Strangers’ is too many different shows

Nicole Kidman indulges the role, but it feels like she's acting in an entirely different show.

Just down the way from the White Lotus is Tranquillum House, a refuge for the world-weary that promises healing and transformation, without the chaos and conversation-starting of its closest thematic competitor.

Nine Perfect Strangers, the new David E. Kelley series adapted from Liane Moriarty’s 2018 novel, is a light satire of wellness and guru culture. It’s also a “Things are not as they seem” kind of show, but as you inch closer to what that might mean (I saw six of eight episodes), you get that creeping feeling that writers Kelley and John-Henry Butterworth didn’t know how to back out of that corner.

Release Date: August 18, 2021
Director: Jonathan Levine
Streaming: Hulu
This new series from David E. Kelley is a mystery set at a wellness resort. Or is it a drama? Maybe a thriller?

The cast of Nine Perfect Strangers is great: Melissa McCarthy, Bobby Cannavale, Michael Shannon, Regina Hall, Samara Weaving, Luke Evans, Grace Van Patten, Melvin Gregg, and Asher Keddie play the (mostly) strangers, who are all at Tranquillum because they’re broken or stuck at some point in their lives. (And, ostensibly, have the money and resources to stay at this posh retreat for 10 days.) McCarthy’s Francis, an author who’s reeling after being scammed by a man online, is given the most backstory, and romantic potential with Tony (Cannavale), a man haunted by his past and hooked on pills.

And then there’s Nicole Kidman as Masha, the intense, mysterious Russian owner of Tranquillum. Masha looks like an alien (and a little like her Aquaman character), gliding around the grounds and sitting silently in her surveillance lair. Are we supposed to embrace her or fear her? Well, the way she uses vague therapy speak and manipulation suggests the latter. And then we see her latch on to the Marconis (Shannon, Keddie, and Van Patten), a vulnerable, grieving family.

From Big Little Lies, another Moriarty book-turned-series, to last year’s outsized drama The Undoing, Kelley reliably gives Kidman a lot to work with. But the issue here is that Kidman—who apparently stayed in character as Masha during filming—appears to be acting in a completely different series. Yao (Manny Jacinto) and Delilah (Tiffany Boone), Masha’s attendants, have professional and personal relationships with her, but they don’t get enough of their own backstory.

Director Jonathan Levine (Long Shot, 50/50) tries his best to keep all the characters in equal time, and gives viewers some more abstract scenes. (One where Francis hallucinates a miniature version of the man who scammed her has Ally McBeal Dancing Baby vibes.) Unfortunately, Nine Perfect Strangers doesn’t know what kind of series it is, bordering on A24-esque horror one minute, then a whodunnit, then romantic comedy, especially in following the budding romance between Francis and Tony, which feels like the most genuine aspect of the show.

Kidman is fully engaged as Masha, especially as she slips in and out of a Russian accent and lets the mask drop a bit. This does feel like a role she was made to play, so it’s disappointing that it feels so out of step with the rest of the series. While there are scenes that hint at the real-world weirdness of retreats like Tranquillum—a nerve-wracking sack race, attendees digging and laying in their own graves—Nine Perfect Strangers skirts around the more insidious aspects of wellness culture in favor of unraveling the mystery of Masha.