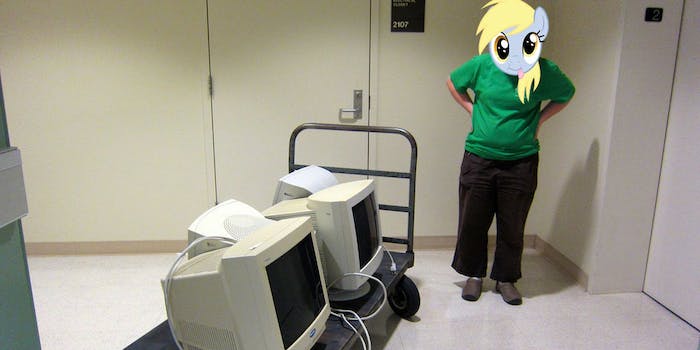 America is in trouble, because 1 in 10 of us think HTML is an STD

Just imagine the sounds of us repeatedly hitting our heads against table.

No wonder your computer gets viruses! It’s infected with HTML!

You know, the STD?

Skeptical? So are we. According to a press release from Vouchercloud’s PR firm, the coupon site surveyed more than 2,300 adults over the age of 18 and came up with some surprising results that were reported on Tuesday by the Los Angeles Times.

According to the survey—and, subsequently, to the Times—15 percent of respondents thought that “software” was “comfortable clothing” while 27 percent believed that a “gigabyte” was an “insect commonly found in South America.” In other words, there were apparently over 600 people out there fearing the sting of the deadly Amazonian gigabyte.

While these results are certainly a bit out there, they could be seen as pretty plausible. After all, a September 2013 Pew research study revealed that 32 percent of American adults find the Internet “difficult to use” while another 15 percent avoid it entirely. And almost everyone can point to at least one older relative who still can’t figure out how to send a text or email.

But there is more to the story.

The site iMediaethics.com, which did some digging once the Times released the survey results, cried foul. They called the survey results (which were not linked to in the original article) into question, pointing out Vouchercloud’s PR firm, 10 Yetis PR, boasts on its website: “From reverse graffiti and environmentally friendly placement of your brand, through to fake protests and flash mobs, if you need help in this area, 10 Yetis PR is the company for you.” (Emphasis ours)

Unfortunately, these revelations did little to stop the spread of the survey results. Many news outlets, including heavyweights like CNET.com and The Independent, picked up the story and ran with it, citing the Times article as the original source. iMediaethics criticized organizations that spread the news, chastising them for reporting vague statistics off of a press release without first seeing full dataset. Of course, it’s not the first time some questionable content has slipped past reporters. Just ask the local TV news stations that were duped into introduced comedian Nick Prueher as “celebrity chef” Keith Guerke.

Once iMediaethics called the validity of the survey into question, several sites updated their stories, including the Times itself. Both the newspaper and Time magazine took the extra step of reaching out to 10 Yetis PR about the veracity of the findings. A spokesperson for the firm told the news outlets, “It’s a completely real study and survey that we sent out to a large database. I’ve read the claims I know exactly what you’re talking about, but it is a real tried and tested method. We’re quite well known in the U.K. for doing these. It’s 100 percent genuine and what we do is 100 percent valid.”

Yetis also provided the Times with this breakdown of the full results of the survey.