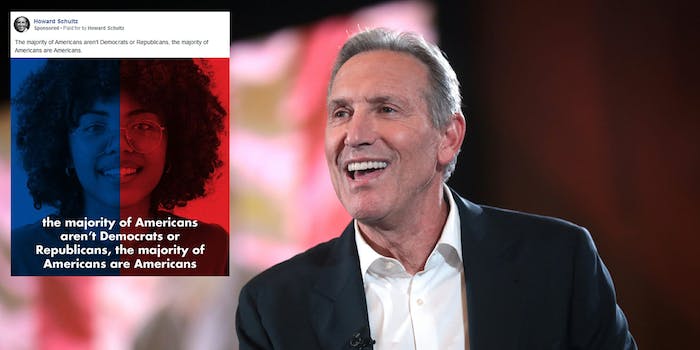 The ad was mocked, because its premise is painfully obvious.

Howard Schultz, the former Starbucks CEO and potential “centrist independent” 2020 hopeful, caught the attention of people online over the weekend when a Facebook ad of his claimed a “majority of Americans are Americans.”

The ad, which began running last week, according to Facebook’s political ad tool, shows a woman with one side of her face colored blue and the other red, clearly representing Democrats and Republicans.

The ad was flagged by NBC News over the weekend.

Schultz also ran a version of the ad with a man, his face similarly split by colors.

It appears that it is trying to hammer home Schultz’s centrist theme of his campaign, which has been widely mocked since its inception.

However, it also points out an obvious fact: all Americans are Americans, not just a “majority” of them.

That caught the attention of people.

I don't know if Howard Schultz has settled on a campaign slogan yet, but "…the majority of Americans are Americans" is certainly a choice pic.twitter.com/LBImTznAuh

Hi @HowardSchultz I know I’ve said some mean things about you in the past but I feel like I have to tell you for your own good that “the majority of Americans are Americans” is the kind of slogan you end up with when your own consultants are mocking you behind your back.

.@HowardSchultz This is incredibly embarrassing. Whoever is advising your comms is doing a terrible job and/or fleecing you. This is not leadership. This is peak waffling. https://t.co/X6bd8vw2h1

this is the worst shit i have ever seen. the majority of americans are americans?? literally what does that mean. pic.twitter.com/MwULq0b2sW

"The majority of Americans are Americans," is what you get when your co-writer looks up, shrugs their shoulders and says, "dude, I got nothing," and looks back down at their empty legal pad.

At least the “majority of Americans are Americans” ad wasn’t a post on Twitter, where Schultz can’t seem to escape being ratioed.