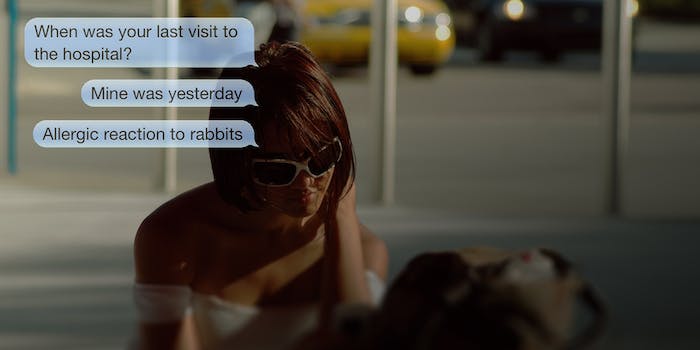 We talk to Emily Miller, who tests the limits of crazy dating behavior for the hilarious Tumblr How to Lose a Guy in One Tinder.

Mobile dating app Tinder promises to find “interesting people around you,” but where’s the line between interesting and crazy? When Emily Miller installed the popular social dating app a few weeks ago, she wasn’t really looking for love—just curious about how much insanity guys would be willing to put up with in pursuit of getting laid.

As she learned, their threshold was pretty high.

Tinder stealthily links up your Facebook (to verify your “realness”; no catfish allowed!) and connects you to those within a determined radius. It’s a far cry from OkCupid and Match.com, the sites Miller knew she would use if she took the online-dating plunge.

On the app, you can’t browse potential dates and come back later; a choice must be made on the spot. Swipe left for a “no” and move on; swipe right for a “yes.” If that person gave you a “yes” too, you’ve got a match. You both get an alert, and you can start chatting.

After a few matches, Miller started to notice a trend.

“I was propositioned for sex every other message,” she said. “No shame, straight-up ‘wanna bang?’ first messages. And it was gross.”

When she realized she wasn’t going to find Mr. Right, she figured she’d keep the app and have a little fun. With all of these guys looking to get lucky, just how crazy could she be until she turned them off for good?

So she took on an alter-ego and began her mission, messaging sex-hungry guys about her cats, her favorite Disney movies, the scene in Titanic that makes her cry the most, and the names she dreams of giving her future children. She even asked one lucky suitor to come to her sister’s wedding with her (Miller does not have a sister)—posing as the salsa-loving vegan guy she’d been lying to her parents about for months.

And then she waited for them to go radio silent. Spoiler: They didn’t. Even the ones who didn’t ask for sex right off the bat eventually got there after sticking a foot in the door.

In the same vein as the Kate Hudson rom-com, How to Lose a Guy in One Tinder was launched to document her findings. Miller sat down with us to tell us a little bit more of the behind-the-blog details.

Daily Dot: What made you decide to treat it like a joke? What was the tipping point?

Emily Miller: Even before I made it I knew I wasn’t going to take it seriously. This character emerged after the first few messages, and I kept going with her. I tried to think of what would make me stop responding to someone, and tried my best to freak them out. The goal at first was to get them to stop responding all together, but that rarely happened.

DD: What kind of messages were you getting from guys?

EM: Some were more in depth than others. It didn’t matter, no matter how flattering or gross they were, once I decided to start the tumblr, I responded back. Some were really terrible pick up lines, others just asked if I wanted to meet up to have casually have sex with them, others simply wrote “hott” or “sexy”—those were the worst. It’s like, TRY. At that point I was even being selective with who I moved to the left and the right of my screen. Now I say yes to everyone.

DD: I love the conversation where you asked one of the guys to be your date at your sister’s wedding, but he had to go by “Mark,” the salsa dancer, because you’d been “lying to your parents” about your status.

EM: HA! Yeah. That was one of the ones that just took on a life of its own. I kept thinking “this will do it, he’ll stop responding now” but he kept going. I even threw in that I didn’t understand his Wedding Crashers reference! Their responses make this project so much more enjoyable. I get to really stretch some boundaries and make myself a little uncomfortable, just to see how far I can take them. I feel like they’d wire me money if I asked nicely and told them they could touch my boobs.

DD: So this is really just proving that if sex is on the table, a guy will do or say whatever?

EM: That’s a piece of it, sure. But I think that women get stereotyped into being “crazy” all of the time. Men are seldom accused of being the crazy ones. To put up with what I am putting down here is crazy.

DD: How do you keep one-upping yourself with the kind of things you say to these guys?

EM: Sometimes I’ll write something so completely out there and out of character, and I don’t know where it comes from. I’ll have already pressed send, read it over, and then not know what to do with myself. In the beginning, I kept going off of the same premise, so to give it more variety I decided to create new situations. The wedding date proposition is my favorite. I also reached out to friends to see if there was a level I wasn’t getting at. My best friend gave me some good ideas as well, like the “you’d make a good dad” one. The responses I get from the more random ones are priceless. But most of it just comes out spontaneously, and I’m not sure if I should be worried of what I’m capable of.

DD: Do you think there is hope for Tinder as a serious dating site?

EM: I don’t know if that’s what the creators were even going for when they initially made it. You have dating sites already aimed at a free way to meet new people, like OkCupid, that let you go more in depth beyond a gratuitous picture of themselves and a sentence. Personally, I think that’s what starts something more substantial, but maybe that’s just me. With Tinder, it’s so quick and shallow, that its target audience isn’t some guy or girl who is looking for something deep; they’re looking for someone who is also quick and shallow. Or something quick and shallow. If both parties are on board with that, then great, of course. They’re looking for someone to hook up with, someone to take them out for a few drinks, and someone who they probably will never see again. But who am I to judge? I’m just a girl who loves too much, looking for a foot rub and my prince charming on my iPhone.

Photo via Lash9420/Flickr. All other images via How to Lose a Guy in One Tinder