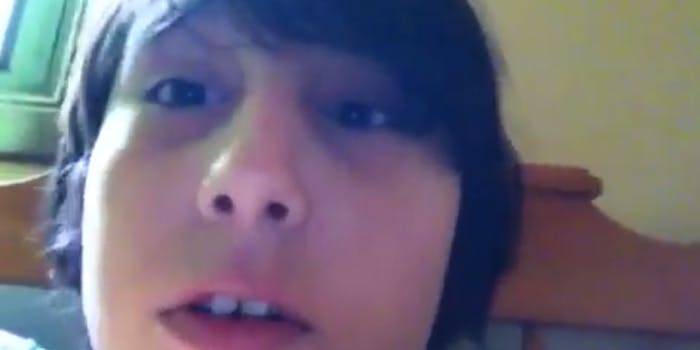 When it comes to love advice, YouTube’s kids are all right

You know you wanna date this dude.

The most important thing you learn in middle school has nothing to do with Egyptian pyramids or how to sort your mammals from your reptiles. It’s how to get a girlfriend (or boyfriend), idiot. And you better figure that out.

Fortunately, the greatest educational facility on the Internet has got you covered—to the tune of 7.1 million YouTube videos concerning how to attract a significant other when you’re still too young to drive.

“Don’t be like, ‘Hey, yeah. You want to watch me punch someone?’ says one, Kieran Beck, who dispensed his years of matchmaking wisdom from bed. “Girls don’t like that, so don’t try it. Be nice.”

Beck also said that he’d come to your house and “dickslap your mom” if you cheated on any girlfriends, so keep that in consideration if you decide to break the rules.

“Appearance,” advises another. “Appearance is this big thing that people love.”

Kids have been making “How to get a …” videos since before Kristi and her buddy hit the airwaves in 2011—but the answer to your foils lies within. Scarily, if you watch enough of these, you’ll find yourself fitting a few of the advised parameters. And the parameters are many. Some of them hit just about 15 minutes in length.

Funny thing is, for the most part, these kids aren’t wrong. Just remember: Be approachable. And get to know her friends.