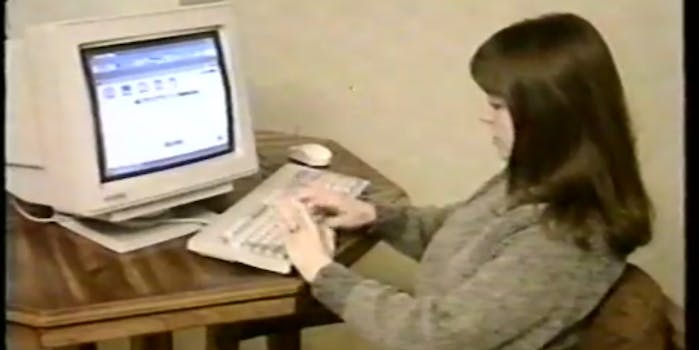 This was really ahead of its time.

Warning: This article contains content that may be NSFW.

Brace yourselves: It is possible to have cybersex… on the Internet, of all places!

While this may be common knowledge (and practice) today, in 1997, such a concept was cutting edge. Back when computer solitaire was still a revolutionary novelty, some company out there decided to put out an instructional video on how, precisely, to have cybersex on the Internet.

In true late 1990s form, the video is rife with weird transitions, graphics and audio that don’t quite match, and a host who wasn’t chosen so much for her expertise, but rather for the fact that she was available that day.

Topless browsing! The future is here!

The video was unearthed by Joe Pickett and Nick Prueher of the Found Footage Festival, which is currently touring the U.S. and U.K. with their latest edition of found videos. The edition also includes a look back at Prueher’s fake celebrity chef prank that made headlines earlier this year.