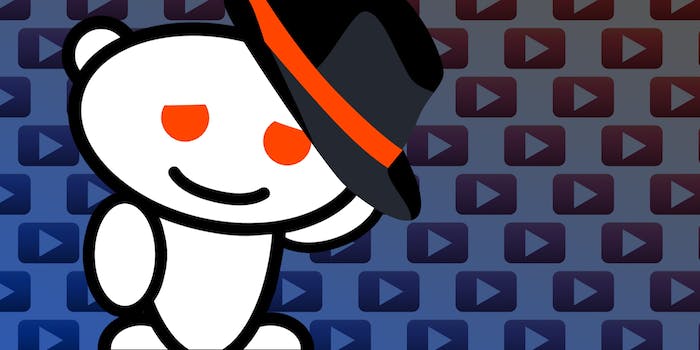 Who are these weirdos, and what do they want?

YouTube comments ain’t what they used to be—and that’s no accident.

Let your eyes wander below a popular video, and you’ll see her: Berta Lovejoy, Feminist, Promoter of Peace, Love, and Equality.

Berta, actually a redditor who goes by the handle FriedCook, is just one soldier of Le Reddit Armie, an online militia of devoted commenters who turn viral videos into a spree of Reddit in-jokes.

At the time of this writing, the group’s wildly styled subreddit, r/RedditArmie (default typeface: Comic Sans), has nearly 5,000 subscribers, with a few dozen members actively commenting on clips popularized by viral-clip hub r/videos. 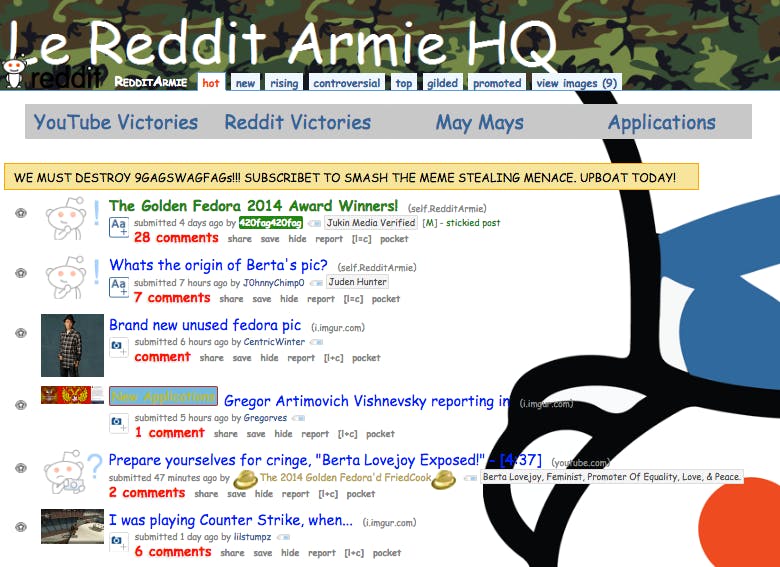 Posts by Armie members are extremely prevalent on YouTube, and this is interesting in itself. It’s the weirdness of the performance—a group that doggedly inhabits their characters and relentlessly upvotes their trolling—that begs pause for thought.

Despite dismissals and suggestions to the contrary, these commenters are not from 4chan or 9gag; they are active members of the Reddit community.

Le Reddit Armie is probably best described as a collection of meta-ironic parody accounts. They simultaneously lampoon both what they suspect a non-redditor’s perception of the Reddit community to be (neckbeard atheist intellectuals with a penchant for fedoras) and the idiosyncratic expressions, running gags, neologisms, or cultural references that actually thrive on the site. They screengrab their YouTube victories—the comments that receive the most attention—and collate their activities on the r/RedditArmie sub, rarely breaking character in the process.

Any Armie member who mentions trolling is reminded that the Reddit Armie is not satire, and they are not trolls. “Expect us, we are coming,” states the moderator, aping the language of mobilized Anons.

Le Reddit Armie knows Reddit inside and out. It knows (and spoofs) what outsiders think of the site, and it’s conscious of how seriously the community takes itself. It seems to understand the false provincialism of online communities as well, as evidenced by its jokes about 4chan invading Reddit to steal its memes. It knows the vernacular identifiers within Reddit, the in-jokes, out-jokes, meta-politics, scandals, and copypastas, and it references the hell out of them all. The signifiers of Reddit’s culture are recursively regurgitated until reduced to mere absurdity.

Original members included u/KaptainKek, u/le-eastendthug, and u/Vagslayer1999. Eastendthug is still active, and although Kek and Vag seemed to have dropped off the radar, new voices emerge as the sub metastasizes. Berta Lovejoy is perhaps the most infamous at the moment, having acquired some notoriety as a result her regular online commentary.

Such character portrayals can be so dryly satirical that redditors and non-redditors alike question their legitimacy. That some find the satire hard to read says something about Reddit’s image problem—for as well as being home to forums for debate, genuinely connected communities, memes, and cats, its well-publicized involvement in episodes like the Fappening and Gamergate, coupled with its often impenetrable jargon, contributes to the confusion over which side of authenticity the Armie accounts fall on.

And as with any online crew, Le Reddit Armie can attract those of varying comedic ability or ethics, with some capitalizing on a perceived carte blanche to mock minorities under the mask of a particularized humor. Such posts range from ill-informed attempts at shock comedy to manifestations of genuine bigotry. And while content of his sort is criticized by other Reddit Armie members as violating the social code—and the mods take seriously any calls to action, deleting posts which encourage brigading—Le Reddit Armie faces the same challenges as other Reddit subcultures, and therefore reflects the wider difficulties that come along as a result of a laissez-faire, if well-intentioned, administrative structure.

So: Are Armie members trolls? Trolling is a word that has taken on a wide, nebulous meaning, but at a very basic level it implies provocative action undertaken in the hopes of a visceral response. But some of the more successful Reddit Armie contributors can be socially useful, distinguishing their activity from that of nefarious troublemakers.

In the tradition of the masterful Yahoo comment troll Ken M, posts by Berta et al. serve as reminders to those browsing YouTube comments to interpret the chatter and banality there accordingly. By commenting in character, they puncture persistent negative stereotypes, making such characterizations absurd—in Berta’s case, the straw feminist. Likewise, the Armie’s frequent, baseless calls for censorship serve to point out the inherent conservatism in such gauche proclamations. 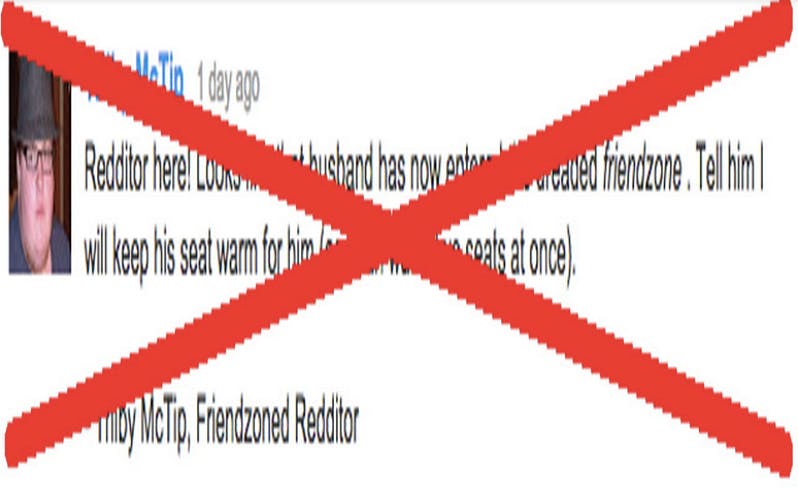 While causing annoyance to someone who wants to browse YouTube in peace—someone has gone to the trouble of making a browser extension to block the fedoras (reviews of which got trolled, naturally)—there seems to be an growing appreciation for the joke, with some comments regularly attracting hundreds of upvotes. And, whether intentional or not, this is worth consideration, as the social processes involved in these pranks go a long way toward explaining the general function of online wit.

Taking a view that creativity and comedy are context-dependent, incongruous humor is successful when it tests but does not rupture social codes. It’s integral to community building. Comedy therefore matters—in Internet chatter as in oratory—as jointly constructed gags allow for collective experiences. It is no coincidence that wordplay occurs in all languages, as jokes are communication devices that facilitate social interactions. Considered more broadly, jokes perceived as entertainment also provide arenas in which hotly contested issues are negotiated.

This is how the Armie self-organizes, and it is telling. On that basis, whatever the reason Reddit Armie says the things they do—be it for the lulz, or for the honor—I will defend their right to say it. Ultimately, they might be the community members who understand Reddit the best. And out of the entire melee, their proclamations of love for reddit.com are probably the only statements made in earnest.

Hannah Barton is a writer based in London.